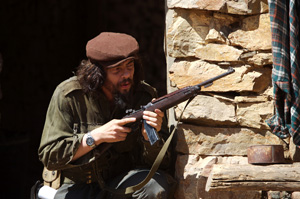 Rarely has a historical figure such as the great Ernesto “Che” Guevara been so revered around the world by a multitude of differing ideological perspectives. From democratic, Western nations to Eastern, more authoritarian countries, the silhouette of Che stands as a symbol of youthful idealism and rebellion. Regardless of geographical location or ethnic background, the ideals of freedom and autonomy are shared by all of Earth’s inhabitants.

Moreover, the complex history of such a significant figure like Che is difficult enough to encapsulate within an academic or autodidactic setting, perhaps taking years to fully understand the circumstances of this period. The fact that Che is over 260 minutes long and divided in two parts speaks to the multifarious nature of Che’s life. So it is not a disservice or a criticism of established filmmaker Steven Soderbergh (Syriana, Michael Clayton) to say his latest work is big on ambition and short on quality.

For starters, the film completely leaves out Che’s exploits in what is today the Democratic Republic of the Congo, in the continent of Africa. To some, attempting to organize in the Congo was Che’s most ambitious effort and one that shifted his ideology toward a more localized struggle that bore fruit later in Bolivia. Although Soderbergh does a good job of detailing Che’s early life and work (part one of the movie going over the Cuban revolution and part two going over Bolivia), not mentioning Africa does not do justice to the film viewer attempting to gain a better understanding of Che Guevara.

Che is not completely without its merits, however. Soderbergh uses his big name to lure some of Hollywood’s most talented actors. Benicio Del Toro as Che is absolutely brilliant; a natural role for an actor of Del Toro’s wonderful attributes.

The Colombian beauty Catalina Moreno Sandino (Maria Full of Grace, Love in the Time of Cholera) does an equally wonderful job playing Che’s eldest daughter Aleida Guevara. We even get treated to serviceable cameos by stars such as Matt Damon, Lou Diamond Phillips and the always-incandescent Julia Ormond (Legends of the Fall).

Another interesting aspect Soderbergh includes in the film and something unbeknownst to me was the facet of Guevara’s life as a ladies man. We can see how Che’s love for women and their contempt for him once they found out the revolutionary was not exclusive confounded Che’s ambition as a leader and as a man.

Overall, Che is worth watching, especially if one is not aware of the comandante’s general accomplishments. Just don’t forget to bring your pillow.