Were the World Mine: (Speak Productions) 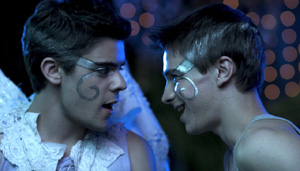 Let’s play dodgeball, musical dodgeball. La la la, la la la. Smack! There’s nothing like a ball to the face to wake someone from their midday dreams.

Inspired by the award-winning musical Fairies (written and directed by Tom Gustafson) and, of course, William Shakespeare’s A Midsummer Night’s Dream, Were the World Mine follows Timothy (Tanner Cohen); a young man faced with daily ridicules from his all-boy classmates, who is in love with the rugby team’s shining star, Jonathon.

Persuaded by his English teacher, Ms. Tebbit, Timothy decides to audition for the senior play, and gets the role of Puck in A Midsummer Night’s Dream. With his tight gray jeans, white shirt, loose tie and fitted jacket, he is everything but an ugly and evil-tempered spirit, even though he behaves mischievously and turns the town gay.

Directed, written and produced by Gustafson, Were the World Mine is a movie about man’s preconceived judgments and prejudices. Wrapped in a pretty little package with lots of glitter and fairy dust, and sung in a heavenly voice, the movie teaches that you cannot judge anyone until you have walked a mile in their shoes.

Were the World Mine releases in select theaters Dec. 12.