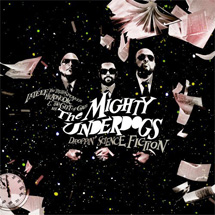 What happens when producer Headnodic of the Crown City Rockers, Latyrx’s Lateef the Truth Speaker and Gift of Gab from Blackalicious get together? They become the Mighty Underdogs.

Formed in 2007, Droppin’ Science Fiction is the band’s first full-length album. It is produced by Headnodic and available through Definitive Jux. This debut album includes tracks such as “Hands in the Air,” “Gunfight” and “UFC Remix,” some of which were featured on the group’s EP, The Prelude, released in 2007 through Giftstribution.

DJ Shadow, Mr. Lif, Casual, Akrobatik and others have dropped by the Mighty Underdogs’ recording studio to add their sounds to the mix. However, despite the presence of such great talents, the CD does not deliver and is not what one would expect from the Underdogs.

This is maybe due to the album’s name. After all, not all science fiction is good. Or maybe, just maybe, it is the group itself.