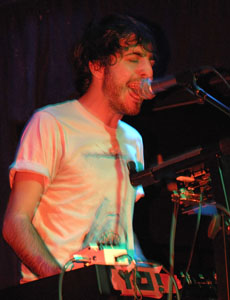 It’s always a bit of a shame when a musician sticks to convention and their performance suffers for it. Luckily, El Guincho, the alias for Spanish musician Pablo Díaz-Reixa, manages to exist outside of expectation and rejects the formula that permeates so much of electronic and pop music today.

El Guincho takes tracks of Spanish canting, tropical harmonies, tribal rhythms and various vocal layers to make music that has an enormous sound. Much of it is danceable and upbeat in a way that is reminiscent of Tropicália mixed with elements of Afrobeat, dub, rock ’n’ roll and pop songs. For being constructed in layers of various identifiable sounds, El Guincho manages to perform an entirely original and unique perspective and sound.

After a long set of new and old songs, a conga line in the crowd and non-stop dancing, El Guincho was commanded back on stage for an encore. While this is not unusual, his response was: He smilingly confessed to the crowd in Spanish that he was all out of songs to play and inquired as to which song he should play again. El Guincho settled on “Palmitos Park,” an especially danceable track from Alegranza and got the crowd moving for an additional relishing two minutes.