Yes Man: Jim Carrey's in it for the laughs. 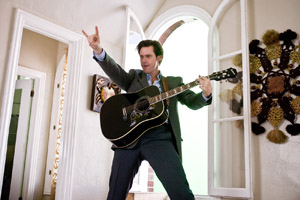 Jim Carrey is returning to his ’90s roots of high concept comedy with Yes Man, the story of Carl Allen (Carrey), a man caught in a tailspin thanks to his constant negativity and dependence on the word “No,” until he signs up for a self-help seminar with one simple tenant: Say Yes to EVERYTHING! Finding himself in a powerful covenant, Carl unleashes the power of “Yes” and discovers his life changes in remarkable, unexpected ways from promotions to romance.

Of course, since it’s a Jim Carrey comedy, there’s also some bungee jumping, oral sex from a senior citizen and a bar brawl as Carl begins to realize that sometimes you can have too much of a good thing and his Yes-itude needs to be modulated.

“I just like being creative,” Carrey says simply one afternoon over apple juice at the Beverly Hilton. “I just want to tell stories. Ultimately, it’s not the money, certainly not the fame, because that’s a pain in the ass; it’s really the person in the seat that you think about when you sit in the rooms and write. It really comes down to thinking about someone laughing. It’s really that that gets me off; the idea of people actually laughing and maybe having something to think about when they leave the theater.”

The message Carrey hopes audience take with them after seeing Yes Man is simple and surprisingly heartfelt from the man who has made millions by talking with his ass cheeks.

“To have a good laugh and feel good in your heart, that is a message,” Carrey proclaims sounding charmingly Tony Robbins-esque. “Engage in life, say yes more than you did before and life turns out alright. Usually you regret the things you say no to.”