Seven Pounds: The movie that changed Will Smith's life 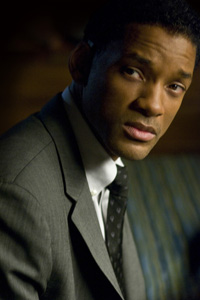 Will Smith’s new movie, Seven Pounds, is a story so cryptic that any sort of synopsis would destroy the mystery the film must remain shrouded in. Instead, as a descriptive, Smith refers to the Shakespearean line from The Merchant of Venice, which inspired this tale of a man in search of seven people whose lives he can choose to change: “These griefs and losses have so bated me, that I shall hardly spare a pound of flesh to-morrow to my bloody creditor. Pray God, come to see me pay his debt, and then I care not!”

The film is an emotionally demanding piece that had a profound impact on its star. Smith found that tackling the role offered him an unexpected window into his own existential dilemma.

“This last year has been kind of scary and frustrating for me” Smith admits, despite a beaming ear-to-ear grin. “I had an epiphany after Seven Pounds, and I realized how much more I want to be, how much more I want to do; the idea of living in service to humanity versus living in service to the commerce of my movies. I want to be remembered as a man who cared about people and dedicated his life to making the world better.”

Smith was unprepared for the emotional ramifications his involvement in the project would have. He remembers times when his family would slink around him in silence because, he says laughing, he looked so crazy. Throughout the entire experience, what grew in him was a sense of redemptive virtue and the idea that the world held more promise than many realize.

His spirituality was also tested throughout filming. Since he was a child, Smith was taught that, no matter how bad life got, there was always somebody in a higher place who would eventually make it better.

“To play a character who doesn’t necessarily believe that,” Smith pauses, shaking his head, “to feel that God made a mistake, and it’s his responsibility to fix it. To carry that emotional weight was a terrifying space for me, emotionally and artistically.”

One wonders why a huge movie star with his pick of almost any script available would choose to tackle a role that contained so much fear and dread. Why not just focus on the prequel to I Am Legend and collect an easy paycheck?

“There’s an idea that was one of the central concepts that I fell in love with in this movie,” he explains. “In the West we think about things in straight lines. There’s birth, there’s life and then there’s death, and at death there’s a cliff and it’s the end of the world and everything’s over. But that’s not how things work!”

“If you take the end of that line and bend it into a circle,” he says excitedly, drawing circles in the air and punctuating them with claps of his hands, “there’s birth, life, death and then rebirth! Rebirth is inevitable!” he practically squeals.

Perhaps that’s why, despite his apprehension, Seven Pounds was something of a rebirth for Smith; a liberating experience that altered the way he approaches material and how he looks at future projects.

“The projects I was choosing, everything had to be OK in the end or it emotionally hurt me,” Smith realized. “Now my sensibilities have become slightly less delicate, and I’m able to venture out a little bit more into the world of emotional and artistic ambiguity in a way that strikes me as more authentic. If there’s been a movie in my career that I’d say changed my life, it’s Seven Pounds. Not Independence Day.”