Brutha: The Harrell 5 Rock with You 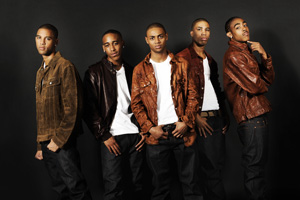 The world of R&B has been on a recent upswing with acts like Ne-Yo, Robin Thicke and The-Dream. However, if there’s one thing to learn from Diddy’s efforts, it’s that putting together a group is hard to do. Egos of strangers can be very hard to manage, and groups sometimes end up in dismemberment. If there’s two things to learn, the second would be, when done right, you can take any group of individuals to the top.

Taking a page from Diddy’s playbook, Island Def Jam looks to one-up the mogul with their answer to the Day26 craze: Brutha. Though Brutha has a reality show like the former (B.E.T.’s “Brothers to Brutha”), trust my words when I say there is no copy/wannabe/imitation here.

Unlike other groups to come out in recent relevance, Brutha is not your average group of singers. Born and raised in Los Angeles, Brutha (Grady, 24, Anthony, 22, Cheyenne, 21, Jared, 20 and Jacob, 19) comes from a long line of performers.

“Our dad was a singer, and our grandma was a singer. It dates back to our great grandmother who was an opera singer,” says Cheyenne.

It’s no wonder these five real-life brothers do it all: sing, write, produce and dance. Their talent caught the eye of Def Jam’s Jermaine Dupri, President of Island Records Urban Music, who, upon hearing them sing live, signed the group to the label, stating that he’s never seen a connection like theirs before. When these five talented guys grab the mic, there seems to be a certain aura about them that screams, as Grady puts it, “We do this!”

Learning to sing at an early age, in part due to family history and a Joe Jackson-like encouragement from their father, Brutha has been perfecting their craft since pampers. “We’ve been singing our whole lives, literally. As soon as we came out the womb our dad started to train us,” says Cheyenne.

From talent shows to Bar Mitzvahs and weddings, Brutha has been preparing themselves for stardom. Now with their hit show on B.E.T creating buzz and debut self-titled album set to release, Brutha feels, with the way the music industry is on a decline, now is the time to change the game.

“We love the business, but we’re kind of disgusted that there isn’t more good music as opposed to bull crap,” says Grady in regards to the lack of “natural” talent in the industry.

A throwback to the days of soul, Brutha looks to bring something new and refreshing to the music industry while taking elements from the eras when music was about talent rather than image.

“We try to capture old school, because that’s all we were raised on; the Jackson 5, New Edition and Boyz II Men. When you come to our show it’s always gonna be high energy and stepping, but we’re gonna hit you with an a cappella to take you back and show you how we really can sing,” says Cheyenne on what Brutha brings to the table.

Though the passing of their mentor and former Def Jam Executive VP Shakir Stewart has put them in a vulnerable state, the hands-on guidance he gave them before he died has helped them grow closer as a group.

With their current single “I Can’t Hear the Music,” featuring Fabolous, making its rounds on radio and TV and a debut album crafted with care by some of the music industry’s best writers and producers, Brutha is on their way to winning fans across America.