Marley & Me: Prepare to fall in love with the world's worst dog 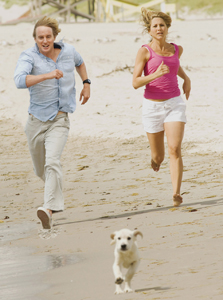 The public has had a long fascination with man’s best friend.

In the 1950s, a collie named Lassie warmed the hearts of millions with her MacGyver-esque rescue tactics as well as the companionship she provided for a little boy named Timmy. In the 1970s, Benji was the scruffy little mutt aiding the helpless in dire times of need. And throughout the 20th century, boys and girls alike marveled at the zany adventures of Snoopy as he did everything from impersonating the infamous Red Baron to dancing on piano tops with his owner, Charlie Brown.

However, audiences never banked on a pooch that eats everything in sight, jumps like a kangaroo onto EVERYONE, destroys entire structures at the slightest loud noise and poops large mounds of mangoes – his favorite snack – for his owners to clean. Yes, it seems that the tide has turned, and the family dog has gotten a serious makeover. World: meet Marley.

In the film Marley & Me, this plucky yellow Labrador turns the lives of his owners John and Jenny Grogan (played by Owen Wilson and Jennifer Aniston) upside down. Marley soon earns himself the nickname “World’s Worst Dog” by his owners, and rightfully so. So destructive are his ways that he soon finds himself the subject of a newspaper column written by his journalist owner.

While Marley and his wicked behavior may sound like a comic work of fiction, the film is actually a true story. Grogan solidified a name for himself in the ’90s as a writer for the Sun-Sentinel in Southern Florida. He later adapted his column into a best-selling book that would later capture the attention of Hollywood.

“We were on vacation, and John’s phone didn’t stop ringing with various studios all trying to cut a movie deal for the book,” says Grogan’s wife, Jenny.

Many attribute the frenzy of the book to its endearing but astonishingly realistic look at the modern American family. In the movie, Aniston gives a tour de force performance as the frustrated wife and mother who is often left to care for the unruly animal while trying to raise three kids and maintain a career of her own.

“It’s marriage. It’s children. It’s career, it’s ego, it’s success versus failure or competition and all of these things that I think universally affect people at some point in a relationship,” says Aniston. “You think it’s a kids’ movie or a dog movie but it’s just a lot more than that, and I made that terrible assumption until I was proven otherwise and had my heart ripped out.”

“I like to think that it’s a story that touches a lot of people because our lives in one way are very ordinary, but in another way, that ordinariness translated into something that was somewhat universal,” John Grogan says. “And so people from all over the world have written me letters saying basically, ‘It was almost like you were describing our lives,’ and it was something accidental. I just stumbled on that. But I think many people fall in love, get married and build families, and that’s really what Marley & Me is about.”

Therein lies one of the greatest lessons in Marley & Me. What seemingly appears on the surface as this year’s lighthearted animal romp is earning itself a huge reputation for being one of the best movies about toughing it out with your best mate (four-legged or otherwise) when the going gets rough.

Marley & Me releases in theaters Dec. 25.