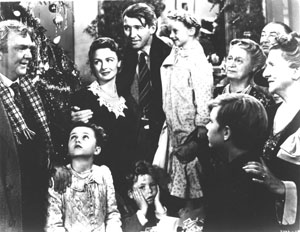 If the economy’s got you shaking in your Santa boots, trudge over to the Eastside and let the Echo Park Film Center’s morale-raising night of holiday nostalgia shower your season with cheer. Starting with a depressed man on the verge of suicide, feeling alienated and alone on a cold Christmas Eve, and ending with a slideshow of water-rotted 35mm slides, the EPFC’s yet-untitled holiday bash will be hours of free fun.

The Echo Park Film Center is a nonprofit media arts organization that screens experimental and independent films in its 60-seat microcinema, teaches the local tweens how to use a Super-8 camera and rents out editing time on their stock of G4s. Every December, this incognito storefront on Alvarado sets out the eggnog and reindeer treats for a come-one-come-all screening of It’s A Wonderful Life.

This year, however, the EPFC has added some special guests to the bill and will also be showing local Al Kasselman’s Super-8 footage of the 1967 Echo Park Christmas Parade (before it became the more politically-correct Echo Park Holiday Parade) and a collection of moldy vacation pictures Doug Harvey found in a “dumpster-bound pile” on the curb.

Save yourself some money and take the brood as their collective present. With so much family values and neighborhood history crammed into one night, your grandma won’t even care that you couldn’t afford to renew her Newsweek subscription. 5 p.m.