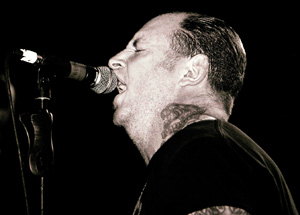 It’s sort of curious that Mike Ness would tour as a solo artist these days, seeing as he’s now the only original remaining member of Social Distortion. But then, it’s a detour from the punk rock that’s carried his career, the opportunity to be an all-American figure, singing outlaw love songs. Even this detour draws Los Angeles’ few rockabilly kids and greasers out from hiding, though, and prompts fights just as well as it’ll draw a circle pit while a cover of Bob Dylan’s “Don’t Think Twice” is playing.

Forty-six-year-old Ness is a flawless performer, his best performances mimicking some of his best recordings – for two, “Crime Don’t Pay” and “The Devil in Miss Jones,” off 1999’s Cheating at Solitaire. These days he’s shunning drugs and praising Obama; he’s also slick as his hair and speaks and moves with finesse, posing with his Les Paul the way it’s meant to be held, playing with the authenticity and heart you’d hope for from such a man. Even in his cowboy hat he squinted with a fury lacking the slightest bit of phoniness or irony.

Before we could cry out for a Social D song, he gave in and ended on “Down Here (With the Rest of Us)” and returned for an encore session, throwing on that hat and completing the night with “I Fought the Law.”