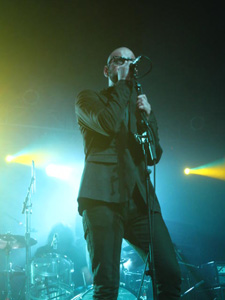 Do you like rock music? Would you put your life on the line for it?

Imagine you had to use an onstage pseudonym, not to sound cool, but to avoid persecution. For Iran’s Hypernova, this is the reality in their homeland. Such bold passion comes across in their brooding, New York-tinged indie rock.

Singer “King” Raam begins the set as an automaton, somewhat reminiscent of a beat poet as his comrades slam around him like anxious, circling vultures. But as the tension builds to the climax of their set, he joins in on guitar, throwing himself more and more into the infectious momentum that spreads like wildfire to the enthusiastic crowd.

“Viva la Resistance” is particularly powerful, Raam wailing in his baritone “I will not bow down to your god, this is not who I am.” Scandalous, considering the context.

They close out the night with the catchy and punctuated “Fairytales,” a grim anthem about jailbait lust that culminates in a ferocious and chaotic finale, members careening about the stage in one final frenetic outburst.