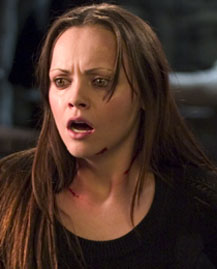 After a nearly complete re-shoot, Wes Craven’s new horror film Cursed will release in theaters Feb. 25. Although the word re-shoot might give some actors nightmares, it doesn’t seem to have fazed two of the film’s stars, Christina Ricci and Jesse Eisenberg. Much of this carefree sense has to do with the film’s director, one of the horror genre’s masters.

"He’s Wes Craven," Ricci says. "He’s incredibly experienced. This is what he does best. He’s laid back. He doesn’t let anything bother him."

Eisenberg agrees. "He has command of the genre. The people on set have a great amount of respect for him. I was confident that what we were doing would be respectable."

In order to get the film to an adequate level, the filmmakers decided they needed to overhaul almost the entire production. As Ricci puts it, "We weren’t seeing dailies, but [those people] who were seeing them, they could tell that it just wasn’t working."

"Very little was kept from the original version," says Eisenberg. In fact, the original even had characters that aren’t in the new version. Skeet Ulrich (Scream) played one of these characters.

"Skeet didn’t want to be in the movie after he saw how his character had changed," Ricci said. "That was kind of sad."

In its current form, Cursed is about an estranged brother and sister (Eisenberg and Ricci) who get into a horrific car accident and make it out alive. However, something happens in the accident’s aftermath that turns them into different beings. They gain powers they never had before, and must stop this curse before it’s too late.

Getting past the re-shoot aspect of the production, it seems that Ricci and Eisenberg enjoyed working on the horror film. It seemed to be especially welcoming to Ricci, who had finished shooting Monster just two weeks before starting work on Cursed.

"Monster was so heavy and emotional, it’s one of the reasons why I took this movie," she says. "I loved working with Charlize (Theron) and Patty Jenkins (the director), but something like that is eventually going to feel heavy. It’s good to be in a movie that’s going to have an effect on people, but it’s fun to just run around and be chased for a little while."

For Eisenberg, it was also a change from some of the more independent fare he’s done in the past. He played one of the leads in the indie hit Roger Dodger, which took about 25 days to shoot. Cursed, however, took around 60 days, and the set was a lot different from what he expected.

"I didn’t realize the set was so quiet on horror movies," he says. "There was a genuine respect for what we were doing. It was an interesting experience for me. It’s so unique in terms of what I’ve done before."

In the last couple of years, Eisenberg has hopped between independent and bigger studio films. He recently appeared in M. Night Shyamalan’s The Village, which grossed over $100 million, while his next film is the Sundance hit The Squid and the Whale.

For Ricci, the future holds a less than desirable outcome for one of her independent films, Prozac Nation. Completed in 2001 and never officially released, the film has finally been sold to Starz!

"It’s extremely disappointing," Ricci says, noticeably and understandably frustrated. On a more positive note, one of her new films is I Love Your Work, directed by her current boyfriend, Adam Goldberg.

While it’s clear that the film world is full of ups and downs, re-shoots and non-releases, it is also apparent that these two stars take these things in stride. Shrugging off tough questions with a smile, they both seem ready to take on whatever obstacle comes next.

With a laugh, Eisenberg says, "We start the sequel next week."