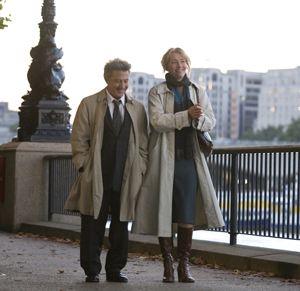 Before Sunrise for those in their sunset years, Last Chance Harvey stars Oscar winners Emma Thompson and Dustin Hoffman as two garrisoned, solitary souls who find themselves suddenly enthralled with each other. New Yorker Harvey Shine (Hoffman) is a jingle writer with the fuzzy end of the lollipop firmly shoved into his mouth who flies to London for his estranged daughter’s wedding.

Harvey is drowning his sorrows at the airport bar when he meets Kate (Thompson), a single woman who buries herself in books, work and smothering phone calls from her mother. Together, they stroll through London, discovering the city and one another, and find the perfect antidote to loneliness.

In many ways, the film was a case of art imitating life. Thompson and Hoffman previously worked together on Stranger Than Fiction. Their time together was brief, but the instant connection they felt onset was staggering.

Thompson describes it as “one of those rare discoveries” where the feelings were electric and cozy, instantly soothing and jubilant.

“There seemed to be no obstacles, no edges to rub off, nothing,” Thompson says. “It happened with a very peculiar, intimate ease, and it was frustrating to us because we didn’t get more to do. We were kind of going mad with this feeling of ‘What a shame, couldn’t we just carry on these characters and make a film about them?’”

Hoffman felt that he had found a kindred spirit and a creative mate in Thompson.

With Thompson, he was miserable at the idea of an acting divorce. What they’d found was too precious.

The pair decided they needed to embark on a project together, but Thompson wasn’t convinced of Hoffman’s sincerity.

“You always say ‘Let’s work together again,’ but it never ever happens and then, when I got home, [the script for Last Chance Harvey] was waiting on my desk, and I sort of yelled, ‘Yes! Quickly! Before he’s forgotten!’”

Thompson squeals. “He said he wanted to work with me, but you don’t believe anything anybody says.”

Hoffman read the script, written by director Joel Hopkins, and, within 48 hours, had committed to the project.

“I think we met, creatively, at the perfect time,” Hoffman explains of his leap to action. “We’ve spent a lifetime doing characters, but I don’t know that we’ve ever done us, personally.”

Both actors felt the characters they were playing spoke to them in ways neither expected.

“They felt they deserved a life, the characters did, and what married it to us was, we felt we deserved to do a film like this at least once,” Hoffman reveals, justifying the simple, heartfelt, emotionally driven piece they created.

For Thompson, the simplicity was incredibly demanding.

“I think the general challenge in this film is it’s not filled with plot, subplot, superplot, action, heroes, villains,” she says. “It’s what I call ‘Bread and Butter Acting.’ It’s inhabiting characters in a very subtle way and making very ordinary moments interesting, engaging and full of meaning. I don’t know that we would’ve been able to have done that when we were younger. That’s the advantage of being older and having done this job for such a long time.”

In the end, the film is about one simple thing Thompson admits: “the movements of the human heart.”