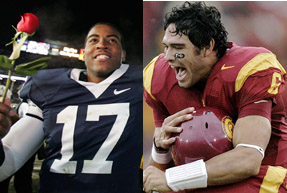 If you feel an earthquake shortly after noon on Jan. 1, odds are geologists at Cal Tech won’t have to travel far to find an epicenter. Featuring two 11-1 teams, eighth-ranked Penn State travels to Pasadena to square off against No. 5 Southern California in what promises to be a memorable, if not earthmoving, Rose Bowl game.

The big game pits a high-octane, flashy Trojan team led by Pete Carroll, while the gritty, old school Joe Paterno is looking to win his second Rose Bowl in what may be his final trip to Pasadena. Both schools have no shortage of talent, meaning Carroll and Paterno will have to earn their paychecks in order to add to their greatness at the other’s expense. To follow is a breakdown of both teams.

The Nittany Lions allowed a little more than 12 points per game and disposed of opponents by an average of about 28 points. Only two teams topped 20 points against Penn State: Iowa and Illinois both scored 24 points.

However, every team found a way to score against Penn State, as they did not have a single shutout. Opponents scored in double digits in seven games against the Nittany Lions. The Big 10 champs allowed 17 touchdowns on an average of about 264 yards per game.

USC: The Trojan defense is always a force to be reckoned with. Featuring Rey Maualuga and Brian Cushing, the defensive allowed just 93 total points in 2008.

Three times opponents failed to score against USC, five other opponents failed to score more than seven, and twice teams were limited to just 10 points. Only two opponents surpassed the 20-point mark: Stanford (23) and Oregon State (27), with the Beavers the only team to defeat USC all season. Outscoring its opponents by around 30 points per game, the Trojan defense allowed just 11 total touchdowns, with opponents averaging 206 total yards and 7.75 points per game.

Edge: Southern Cal. Penn State has Lydell Sargeant, and USC will struggle to stop the run game. However, Cushing and Maualuga lead a speedy, pressure-oriented defense that can make the stops when it matters most. The Penn State defense needs to force a few Trojan turnovers early to compete.

The Nittany Lions’ offense scored 45 or more points in seven games this season, including 66 in its opener against Coastal Carolina. Only once were they held to less than 20 points: a 13-6 victory over No. 10 Ohio State.

Junior quarterback Daryll Clark stepped up in his first year as starter, tossing for 17 touchdowns and four interceptions on 171-of-285 passing in 12 games. Clark will have to keep up his game, however, since he will not have the security of solid back up Pat Devlin, who is not making the trip to Pasadena as he announced his intentions to transfer.

USC: Mark Sanchez led an offense that appeared ragged at times yet ended up logging more than 462 yards and 37.5 points per game, both ranked 14th nationally. Only twice this season were they held under 20 points.

Individually, Sanchez was solid and comfortable under the gun, throwing for 2,794 yards, 30 touchdowns and 10 interceptions, completing 213 of 331 passes. His quarterback rating was a sizzling 159.1.

Receivers Damian Williams (48 receptions, 707 yards, eight TDs) and Patrick Turner (45 receptions, 667 yards, 10 TDs) helped Sanchez in the secondary. The Trojan attack was relatively balanced, with per game averages of 206 yards on the ground and 247.1 yards in the air.

Edge: Southern Cal. Royster is a big game performer, but the big question mark is Clark. If he can figure out the Trojan defense, he has the weapons to keep up. Otherwise, the Trojan offensive may gradually wear down the Penn State defense.

Derrick Williams is a major threat against any special teams defense, scoring two touchdowns on kickoff returns and another on a punt return. On the other side, Jeremy Boone averaged a crisp 42.5 yards punting, placing many teams deep in their own territories.

USC: Greg Woidneck was impressive as punter, averaging 36.6 yards per kick away, while Stafon Johnson returned 32 punts for 303 yards, an average of 9.5 yards. C.J. Gable scored the only special teams touchdown, on a 93-yard kickoff return.

Edge: Penn State. Williams will truly test the USC defense, while Boone will make it difficult for the Trojans to have solid field position.

Paterno’s resume at Penn State is staggering. He has the most regular season victories (383) and bowl wins (23). Twice, he led the Nittany Lions to a national championship. He has at least 12 awards commemorating his coaching successes. This season, he brings a little extra motivation to the Penn State sideline – after suffering a game injury in September, JoePa had hip surgery, and resumes coaching duties for the first time since.

USC: The Trojans have qualified for a bowl game every year Carroll has coached at Southern Cal. He is 5-1 in BCS bowl games – the only loss to Texas in 2006 – which is a record. The only other bowl game Carroll lost in his tenure in Los Angeles was in the 2001 Las Vegas Bowl, his first season as coach.

This season, his Trojans finished with at least 11 victories for a seventh consecutive season. Clearly, he is doing something right.

Edge: Penn State. It is hard to argue against 42 years of experience, even with Carroll’s experience. Paterno knows his X’s and O’s quite well, and his players will want to win one for him after returning to the sideline after many thought he would never coach again.

Penn State will be pumped with JoePa’s first game on the sideline since September, and the team being solid all-around will give the Trojans fits. Clearly, USC has not faced competition this tough all season, and it will show in the first half.

Expect the Nittany Lions to hold a slim lead at halftime, with USC edging it out in a nail-biter. The Trojans will win their fourth Rose Bowl title in six years on a late-game field goal.