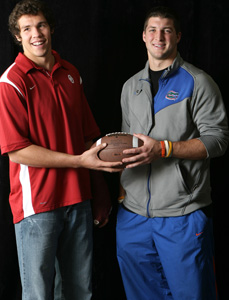 Hawaii’s offensive line is among the weakest in the nation, and it showed – the Warriors’ running game is ranked 108th in the nation. While they are not the same team led by Colt Brennan last season, the Fighting Irish are not exactly stiff competition, and the Warriors would like to beat a top-flight program like Notre Dame on their home turf.

Quarterbacks Rusty Smith (Florida Atlantic) and Dan LeFevour (Central Michigan) will bring a lot of fireworks to this game, so expect a high scoring one. Smith led the Sun Belt in passing with 2,918 yards and 22 touchdowns, but he needs to keep his interception total low if he wants to lead his team to victory. LeFevour was also impressive, completing 66.4 percent of his passes for 2,531 yards and 19 touchdowns.

Both teams have a solid running game, and both teams had struggles at quarterback. Wisconsin’s P.J. Hill (1,021 rushing yards, 13 touchdowns) and John Clay (845 yards, 9 touchdowns) are a difficult tandem to stop and will be the difference makers in the game.

The Emerald Bowl will be decided in the trenches. California has a talented yet injury-laden offensive line. Behind that line is the savvy running back Jahvid Best. However, the Miami defensive front is young and energetic. If that line can improve its run-defense, Miami may have a chance. Yet, Best will be hard to slow down, especially in a virtual home game for Cal.

Bowl-inexperienced North Carolina faces off against a West Virginia team that has two BCS wins in the last four years. Yet, the Tar Heels blew out two Big East bowl-bound teams in Connecticut and Rutgers. The Mountaineers will try to rally behind quarterback Pat White, who is playing in his final game for West Virginia. Yet, the Tar Heels are playing in their own backyard.

Neither team has much bowl-game experience, with Northern Illinois fresh off a two-win season in 2007 and Louisiana Tech playing in its first bowl game since 2001. Tech is on a roll, winning five of its last seven games. Both teams have weak passing games, but Tech has a stronger ground game that will make the difference.

Legion Field at the University of Alabama Birmingham

This year was a tale of two seasons for both teams – Rutgers started 1-5 while NC State was a measly 2-6 entering the season. But the Wolf Pack won its final four games, including two against ranked opponents. Rutgers averaged 46 points per game and blew out opponents by an average of 29 points in its last five games.

Led by Corey Wootton, Northwestern’s defense will try to stop Mizzou’s explosive offense, which was among the nation’s top six in total yards, passing yards and point scored. Stopping that offense will not be easy.

Both teams feature top 10 offenses and weak defenses. However, Oklahoma State’s trio of Zach Robinson, Dez Bryant and Kendall Hunter will probably trump Oregon’s Jeremiah Masoli in a game that is expected to be a shootout.

Nevada has the nation’s second-best ground game, averaging 291.4 yards per game behind Vai Taua and dual threat Colin Kaepernick (WAC Offensive Player of the Year). Conversely, Maryland’s offense has been erratic this season and averages just 20 points per game.

Rice was granted home field advantage for its first bowl game since 1954. Western Michigan’s pass defense was ranked 96th in the country, which should be a delight for Owls receivers James Casey and Jarrett Dillard, the only wideout duo to average 100 yards receiving each game.

Houston’s total offense and passing game were both ranked No. 1 in the nation, with Case Keenum (4,768 passing yards, 43 touchdowns) leading the way. However, Air Force’s fifth-ranked running game can slow a game down, but it will not be enough to defeat the Cougars.

The Tigers have a respectable triple threat in Jarrett Lee, Charles Scott and Brandon LaFell, but Louisiana State is nowhere near the championship form of last season. Also, the Tigers’ defense will struggle to stop Jonathan Dwyer, who was instrumental to Georgia Tech’s third-ranked ground game.

Kansas has a relatively potent offense, led by junior quarterback Todd Reesing (3,575 yards, 28 touchdowns). The Jayhawks also enter the game on a high, defeating Mizzou in the season finale after losing four of its previous five. However, Minnesota is trying to forget its 55-0 season-finale loss to Iowa.

Both teams allowed 241 points, yet Vanderbilt will have to overcome its anemic offense (19.4 points per game) to have a chance to win. Thankfully, Boston College’s offense is not much better. However, if Boston College can score at least 30 points, they are nearly unstoppable, losing only once since 2001 when passing that mark.

Both teams have solid running games that will keep the defense on its heels. However, Oregon State’s Lyle Moevao has more options in the secondary and has thrown for 10 more touchdowns than his counterpart, Pittsburgh’s Bill Stull.

Georgia (Knowshon Moreno) and Michigan State (Javon Ringer) feature top-notch running backs, with each back finishing 16th and third in the nation in rushing average, respectively. However, Georgia’s Matthew Stafford put up impressive numbers compared to his Michigan State counterpart, Brian Hoyer. If Stafford and Moreno step up, Georgia should win.

Nebraska brings a top 20 offense to the Gator Bowl, but Clemson’s defense allowed just 16.6 points per game. The Tigers need to rely on their defense to slow the Cornhuskers, though their healthier-than-normal offensive line will help. Will Clemson ride the wave of a just placed coaching staff? Or will Joe Ganz (3,332 passing yards, 23 touchdowns) lead Nebraska to victory?

Cincinnati overcame several key injuries to win the conference title. The Bearcats, who started five different quarterbacks, need to rely upon Tony Pike to lead them to victory. If it is close, Cincinnati is tested; they won six games by eight points or less. Running back Darren Evans (1,112 yards, 10 touchdowns) is Virginia Tech’s best chance to win.

Iowa running back Shonn Greene will dominate this game, as his 1,729 yards and 17 touchdowns on the ground shadow all other individual statistics for both teams. South Carolina’s offense is relatively anemic, scoring just 21.7 points per game, compared to 30.3 points per game for Iowa.

Texas Tech’s potent offense finished fourth in the nation in total yards, second in passing yards and fourth in points scored. Quarterback Graham Harrell may be slowed by recent surgery, but receiver Michael Crabtree should help the Red Raider aerial attack. The question is whether Jevan Snead, who was a backup with Texas last season, will prove he is worthy of being a big game starter.

Both teams are relatively equal on paper, but Kentucky comes into the Liberty Bowl slumping, losing four of its final five games. The Tigers, conversely, are riding high after claiming the Conference USA title. The time off may help Kentucky regroup, though.

Alabama settles for the Sugar Bowl after losing its regular-season finale. Both teams have stellar defenses, but if Alabama’s Glen Coffee can maintain a solid running attack, the Crimson Tide may redeem its one loss and defeat a solid Utah team.

Two bowl game newbies, Connecticut features the nation’s top rusher (Donald Brown, 1,822 yards, 17 touchdowns) and a tough defense. Buffalo, conversely, scored at least 30 points in seven games this season and features a 3,091-yard passer (Drew Willy) and a 1,308-yard rusher (James Starks). Even if the Huskies defense slows both Willy and Starks, their offense may not be able to keep up in a virtual home game for the Bulls.

Texas ranks in the top 10 in all four major offensive categories. Quarterback Colt McCoy will be out to prove he should have won the Heisman Trophy and his team should have been in Miami Jan. 8.

The GMAC Bowl may be the best non-BCS game on the docket, as it features two of the nation’s top 15 offenses and two standout quarterbacks. While Tulsa ranks second in the nation in total offense and points scored, how will it fare against a Ball State defense that allowed less than 19 points per game? Ball State will be motivated to win its first-ever bowl game.

The last two Heisman winners face off in what should be a doozy of a championship game. Sooners quarterback Sam Bradford leads the nation’s highest scoring team, which scored at least 61 points in each of the last five games. On the other side, Tim Tebow will have a chip on his shoulder, as he lost the Heisman to Bradford despite having more first-place votes. However, the Sooners’ running game may prove too much for Florida.