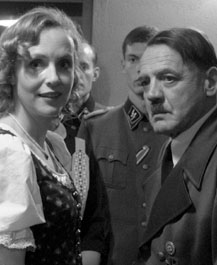 While it isn’t the first movie to come along that examines Hitler, the Nazis, and the end of World War II, Downfall, which opens in limited release Feb. 25, is by far one of the most potent and revelatory.

The film, which is currently nominated for an Oscar in the Best Foreign Film category, is the third project from Das Experiment director Oliver Hirschbiegel. Downfall is a slow-moving, drama-heavy production primarily set in Hitler’s famed bunker toward the end of World War II, where the once-powerful German leader watched his life slip through patches of betrayal and despair before ultimately committing suicide to avoid capture by the Russians.

The story is based on two books – Inside Hitler’s Bunker by Joachim Fest and Until the Final Hour by Melissa Muller and Hitler’s secretary, Traudl Junge – and told through the viewpoint of Junge (Alexandra Maria Lara) herself, a headstrong young woman who, by the end of World War II, regrets ever having worked for the Nazi party.

Perhaps the most engrossing part of Downfall, however, is Swiss-born actor Bruno Ganz’s portrayal of the German dictator. Ganz – who has appeared in such films as The Boys from Brazil and the 2000 critical hit Bread and Tulips – lends a hefty range of emotions to his role as Hitler, including everything from the expected fits of harsh rage to softer, more empathetic sentiments like generosity and, as he realizes the end of the Third Reich is near, even vulnerability.

Hitler appreciates a handful of the people around him – his wife, Eva Braun (Juliane Kohler), his secretaries and a few of his loyal devotees – but at the same time fears the betrayal of army generals he assumes will never fail him. Hitler’s last days in his Berlin-based bunker are very tense, and the horrid emotions are shown on the faces of everyone in Downfall’s vast supporting cast.

The film, although a bit slow in execution, is an interesting study of the last part of Hitler’s life, as well as a film which truly succeeds in isolating and examining a very distressing part of world history.