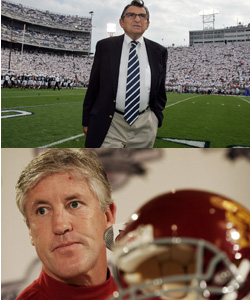 Paterno, 82, will face USC in the Rose Bowl for his record-breaking 35th bowl game. Like his USC opponent, “JoePa” as he’s known around the college football circles, came within a win of possibly playing for the national championship.

The Nittany Lions were ranked as high as third in the nation with a 9-0 record. But the dream of a shot at Paterno’s third (and maybe last) national title ended on a last second field goal in a 24-23 loss to Iowa Nov. 8.

So now, Paterno and the Big 10 champion Nittany Lions, who finished eighth in the BCS regular season poll, play USC in the Rose Bowl Jan. 1. It is the first time the two have met in the New Year’s Day game since 1923 when the Trojans won 14-3 and Paterno was three-years-old.

In 42 years as the head coach at Penn State, the feisty Paterno, with his trademark goggle-type glasses, hasn’t missed a step – sort of. On Nov. 23 Paterno underwent hip replacement surgery and was released from the hospital just two days later. He injured his hip while demonstrating an onside kick to his players in practice in August and spent most of the season coaching from the press box.

Paterno is the winningest coach in Football Bowl Series (formally Division I) history with 383 wins. His resume reads like no one else’s in college sports. After all, he has been successful since he became the head coach of the Nittany Lions during the Lyndon Johnson administration in 1966.

Among his numerous Coach of the Year awards, Paterno was the first college football coach to be named “Sportsman of the Year” by Sports Illustrated magazine in 1986. His teams have finished in the Top 10 21 times. Paterno is the only coach to have won all the major bowls (Sugar, Fiesta, Rose, Orange, Sugar – as well as the Cotton Bowl) at least once.

But with all of his success, Paterno has received plenty of criticism, too. Most of the criticism recently has been about his age and how college football today has past him by according to some of the “experts” in the game. There have been demands for years from those inside and outside of Penn State for Paterno to retire.

But Paterno shrugs off the criticism the best way he can – by winning. He says he plans on coaching as long as Penn State allows him to and has no immediate plans to retire. He even jokes that he could coach for another 10 years.

“I don’t even care if I get a contract. I’ll be very frank with you,” Paterno told the Associated Press in March. “I think the university will do what they think is right, whenever the time comes. Right now, I’m very comfortable.”

And just to emphasize his point about his good health, his love for the game, Penn State and his willingness to coach, Paterno made it clear that not only would he coach in the Rose Bowl, but he would do it from the sideline as well. He even went on to indicate that he would run out of the tunnel with his team when it faces USC on New Year’s Day.

Since the day the USC Trojans football team was upset by the Oregon State Beavers Sept. 25, Coach Pete Carroll has been openly critical and questioning how the Bowl Championship Series (BCS) works and why he thinks USC has gotten a raw deal all season long as far as moving up in the rankings and reaching the BCS game. During a press conference in November Carroll summed up his feelings saying the system “stinks.”

“I don’t understand how the thing works,” Carroll said. “What is the criteria of the process? Is it to pick the team that has the best season, that has the season that you like the most and feel best about voting for? Or is it the best team at the end of the year, the team that would win a playoff system if you did have it?”

The loss to Oregon State was the Trojans’ only one of the season as they finished 11-1. They were one of eight teams in the top 25 with one loss, but the Trojans finished fifth in the regular season rankings after winning the Pacific-10 title for a record seventh consecutive year.

Carroll has brought the Trojans back to college football dominance. His teams have such confidence and swagger that he was willing to forfeit a timeout at the beginning of the UCLA game at the Rose Bowl Dec. 6, just so the Trojans could wear their dark cardinal jerseys. USC won the game against its cross-town rival 28-7.

Carroll is 3-1 in Rose Bowl games and 5-1 in BCS bowl games, including the 2004 national championship in the Orange Bowl, and an Associated Press National Championship in 2003.

Since arriving at USC in 2001 after a less than stellar stint as an NFL coach, Carroll has returned the Trojans to national prominence. After finishing 6-6 in his first year, USC has finished no lower than fifth in the national polls. Carroll has won numerous Coach of the Year awards and three Pac-10 Coach of the Year awards. This year ESPN even called USC’s hiring of Carroll the No. 1 top moment in the Pac-10 in the BCS Era.

Carroll’s record at USC going into the 2009 Rose Bowl is 87-15 overall and 57-10 in conference play. He has the highest winning percentage of any current coach in the Football Bowl Series (formally Division I) with at least five years of experience. That puts him in great company alongside Florida State’s Bobby Bowden, Texas’ Mack Brown, Oklahoma’s Bob Stoops and his opponent in the Rose Bowl, Joe Paterno.

Another Rose Bowl victory could not only seal Carroll’s legacy at USC, but it could also signal an end. The NFL is always calling, and one wonders when Carroll will finally accept the call and take up some needy team’s offer to coach.

But in the meantime, Carroll will try continue to figure out the whole BCS mess and prepare his team for another big Rose Bowl game in front of tens of thousands of USC faithful and perhaps come back and make another run at a national title next year. And if Carroll stays at USC a little while longer he can kill two birds with one stone.