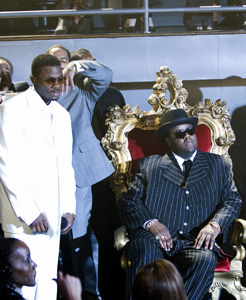 Sometimes it’s hard to really ascertain whether a year at the movies was a good or bad year because the bad films generally outnumber the good ones. Here are 10 of the candidates for 2009 to be among the films that turn those frowns upside down.

Finally, the story of the Notorious B.I.G. will be immortalized on film. The film chronicles the Brooklyn MC’s struggles as a drug dealer to more struggles as a superstar recording artist.

This looks like it could be the first hip-hop biopic that will be able stand among the ranks of films like Ray, What’s Love Got to Do With It and Walk the Line.

Not exactly a reboot of the long running franchise; rather another ‘entry.’ The new film goes back to when James T. Kirk and Spock were just getting their feet wet and about to become the crew of the S.S. Enterprise.

I love films that go back and realize the beginnings of iconic characters (assuming it’s done well).

Stepping out of his comfort zone of gangster flicks, director Guy Ritchie’s take on the British detective is definitely going to be an exciting moment. With Downey Jr. in the title role fresh off hitting a game-winning grand slam with Iron Man, I anticipate this film doing very well.

After the hilarious, tear-inducing Borat, Sacha Baron Cohen is bringing another one of the his beloved characters to the screen from his hit HBO show “Da Ali G Show.” While Borat was a clueless foreigner, Bruno is a clueless gay fashionista.

Some of the hallmarks of the character are putting homophobic people in homoerotic situations and watching them freak out, and getting people to inadvertently insult other peoples’ clothes. I expect this one to be another hit for Cohen.

Salvation is the fourth film in the Terminator franchise and the second one to not be under the helm of James Cameron. The first two films are not only my favorites, but are considered two of the best science fiction films of all time.

Although the trailer looks promising, I’m still not totally convinced. I think the idea of setting it in the future is definitely the best way to go, but I can’t help but wonder what Cameron would have done.

What’s keeping me enthusiastic about this project is the involvement of Christian Bale. That man has proven he knows a good script, so I’m willing to put my feelings aside and be open to the movie.

What made the X-Men films difficult was the balancing act of having so many characters to develop. Now, Marvel is breaking it down and trying out giving individual characters their own films.

Hugh Jackman reprises his role from the ensemble films as Wolverine, and in this piece, we get to see the origin of the character straight from the comics. This film is supposed to have happened before the X-Men films, so it’ll be interesting to see how everything adds up and/or if there are things that conflict.

A remake of the classic tale of a man who is bitten by a werewolf only to become one himself. Perfectly cast, Benicio Del Toro stars as Lawrence Talbot who becomes the wolf man and also perfectly cast, while Hugo Weaving plays the detective on his trail. And Anthony Hopkins is always perfectly cast.

Where The Wild Things Are (Warner Bros.)

This film is an adaptation of a children’s book of the same name that was not only a favorite of mine when I was young but also lots of other youngsters. It tells the story of Max, a young boy who ventures into a mystical land and makes friends with big hulking monsters.

This film has been pushed back again and again, most likely due to the clash between Spike Jonze’s filmmaking and the studio’s “Show me the money!” principles. Either way, hopefully it won’t get pushed back anymore, and we can see a cut of the film that satisfies everyone.

Back from hiatus, director James Cameron is making movies again, and the guy has some kind of chip on his shoulder where he just can’t seem to make a movie without trying to re-write the book on special effects.

The film follows the story of a marine who crash-lands on an alien planet and becomes friends with the natives. After the planet becomes the target of an invasion from Earth, the marine leads the natives into battle to defend it.

Apparently, Cameron and his crew have invented all sorts of 3D cameras and visual effects for this film. Once they start putting out trailers and we get a glimpse at what they’ve created, I’m sure the firestorm of hype will really get underway.

What can be said? Unless something surprises us and is too brilliant for words, this is definitely set to be the movie of the year. Non-Watchmen fans have no idea what this film means.

Watchmen is considered by the majority of comic book and film fans as the greatest comic of all time. Everything from the characters, story and artwork to the setting, themes and moral dilemmas transcends comic books. Watchmen is a work of literary art.

The project has been in development for years, but nobody had really figured out how to do it. Enter director Zack Snyder. From the trailers and previews it looks as if he’s nailed it, so fans can rest easy.