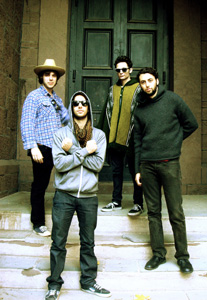 Johnson&Jonson – A hip-hop collaboration out of Long Beach between slightly established MC Blu and producer Mainframe, this pairing’s got looped, crackling soul and jazz beating under addictively smooth vocal styling. Lots of retro quality here, and with their self-titled debut for Tres Records receiving praise from publications like Vibe, no doubt their upcoming releases, like the, ahem, “Kinda Dusty” 12-inch (presently available only on Japanese import), will develop a fair bit of hype. myspace.com/jandjbabyproducts

Haunted Tiger – Look these folks up on MySpace and you’ll find among their influences hotels, champagne, “whipz and furs.” Sums it up, really. This girly quartet of Los Angeles is at once glamorous, spooky, generous with raunch and feedback. Best for fans of Bat for Lashes, this year’s EP DSXCO is psychedelic and haunting, the sound of glitter raining down on a Halloween night. myspace.com/sleepyqueens

Blue Jungle – Yet another female-fronted rock group, with swirling guitars, oversized walls of distortion, vocals distant and, like, apathetic (singer Blu Blu is to thank for that one). A crop of January shows in Los Angeles will follow the release of recent LP Baby Don’t Cry – see them at the Smell Jan. 10 or the Knitting Factory Jan. 23. pleasefuckingkillme.com

Slang Chickens – A refreshing breath of grimy cowpunk, poking out from the indie scene in Los Angeles. Slang Chickens are led by Evan Weiss, formerly of Wires on Fire, who can create all sorts of electricity with a banjo, and of whom there is in fact a paper doll, available online at Chicks on the Rail (myspace.com/prettyvioletcolouredshirt). For the rockabilly fans, few and loyal, the band will be at the Unknown Theater Jan. 9 and the Smell Jan. 20, opening for Crystal Antlers. myspace.com/slangchickens

The Entrance Band – They look rather like a Goth cult, but Goths aren’t terribly into psychedelic shit. There’s an interesting dynamic between the pairing of frontman Guy Blakeslee and ladybassist Paz Lenchantin (former Zwan, A Perfect Circle); it’s actually Lenchantin, hair down to here, who owns the stage – an amazing feat accomplished by an underrated bassist. Entrance has yet to announce a label signing as of press time but perform their brand of ’60s-inspired hard rock in Los Angeles on a regular basis. entranceband.com

Leslie and the Badgers – It would be tempting to refer to Leslie Stevens as a poor man’s Neko Case, but as the sweetly-crooning, guitar-slinging frontlady of Leslie and the Badgers, she holds her own quite well. Sure, there might be an ironic moustache or three among the Badgers, and sure, their personal style might cave to the temptation of appearing a flock of old souls or whatever, but this band’s sound is pure country. Albeit, diluted just enough for the Silver Lake crowd. Speaking of which, they’ll be at the Silverlake Lounge Jan. 12 with Olin and the Moon. myspace.com/leslieandthebadgers

Gangi – Matt Gangi, multi-instrumentalist and Williamsburg resident, moved to Los Angeles and paired up with percussionist Lyle Nesse. Together they are Gangi, performing to those hip kids in Silver Lake, offering a blend of hip-hop and dance punk inspired by both of the above and all in between. Their show is rather visual, though you’ll have to get used to Gangi doing that “DJ” thing, where he stands at his table and silently says “check it” over and over by pointing his hand in the air. myspace.com/gangimusic

Afternoons - Afternoons is a spinoff of L.A. indie pop band Irving, featuring a few dapper lads and a classically trained opera singer, Claire McKeown, who acts as the band’s living, singing saw. It’s McKeown, actually, who sets this band apart from all the other bands in Los Angeles who are, you know, dapper and poppy. They’ve opened for other super happy pop bands in the last year (Tokyo Police Club, the Wombats), and have already gotten the royal Stamp of Approval from Indie 103. Their live show is a grand affair, as full and complete as can be. myspace.com/afternoonsmusic

The Cheap Leis – Finally, an outlet for “Hukilau,” typically heard in the form of sing-along sessions on Hawaiian tour buses. This San Diego group, specializing in the stuff of our 50th state, are unsigned to date but have the privilege of performing with groups like the Night Marchers and the Knitters. They’ve been around since 1997, so perhaps spending a bit more time with the punk crowd will help them find some biters. One can rock a ukulele, no? myspace.com/thecheapleis

Wild Weekend – Another San Diego group, this one of lady-driven power pop. With only a couple of seven-inch records to their name, Wild Weekend will be recording their debut and touring up the West Coast in January. They’re not as commanding as, say, Mika Miko, and their sound doesn’t have the attitude to match the lyrics, but they’d be an ideal female counterpart to perhaps a semi-snooty, humorous garage band like the Time Flys. For now, though, they’ll be sharing a stage with the Dogs at the Redwood Bar Jan. 16.