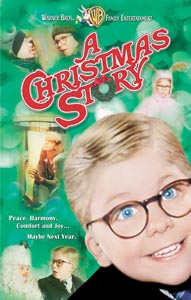 1) A Christmas Story (1983): Ooohhh, fuuudddgggeee. We double dog dare you to name a film more intrinsic to the holiday experience. All Ralphie Parker wants is “an official Red Ryder carbine-action, 200-shot Range Model air rifle with a compass in the stock and a thing which tells time,” but everyone thinks he’ll shoot his eye out. Proof that a boy with a dream can overcome adversity, from neighborhood bullies to soap wielding mothers.

3) A Charlie Brown Christmas (1965): Charlie Brown is overwhelmed by the ravenous materialism he feels is devouring the Christmas season. Nowadays, he’d be diagnosed with “Seasonal Affective Disorder” and prescribed Wellbutrin, but in this holiday classic it takes a small, limp, shedding Christmas twig, the Peanuts gang’s putting on a holiday play and wise-beyond-his-years Linus to teach Charlie the true meaning of Christmas.

4) Miracle on 34th Street (1947): Need proof that Santa really does exist? Watch this movie. When a nice old man claims to be Santa Claus, he gets tossed into a mental institution and is forced to stand trial to prove he’s the real thing.

5) Die Hard (1988): Perhaps not the most traditional choice, but John McClane definitely brings his own version of yuletide cheer. The first installment of the Die Hard series sees McClane (Bruce Willis), an NYPD detective, flying to Los Angeles to reconcile with his estranged wife. When terrorists crash her office holiday party, it’s up to him to save the day. Nothing says Christmas quite like “Yippee-ki-yay, motherfucker!”

7) Love Actually (2003): Interconnected love stories weaving through the city of London play out during the five weeks leading up the Christmas in a film that encapsulates the holiday spirit by proving that “love actually is all around.”

8) Home Alone (1990): Before the franchise got totally sucky in New York City and battled North Korean terrorists, eight-year-old Kevin McAllister (Macaulay Culkin, in the role of his life) had to defend his house against two bumbling burglars when his family accidentally forgot him as they jetted off to Paris for the holidays. Anyone got a hankerin’ for some Little Nero’s Pizza?

9) Scrooged (1988): Dickens’ A Christmas Carol modernized and starring Bill Murray, at the zenith of his gargantuan comic brilliance, as a cynical, narcissistic TV executive who realizes, after being visited by the ghost of Christmas past, present and future, that he must change for the better.

10) How the Grinch Stole Christmas (1966, animated TV movie/2000, theatrical release): Dr. Seuss’ classic tale of the Grinch with a heart “two sizes too small” who decides to ruin Christmas for the Whos in Whoville. Whether you prefer your Grinch animated by Chuck Jones or played by Jim Carrey shoved into a latex suit, it’s nice to be reminded that “Christmas … doesn’t come from a store … Christmas, perhaps, means a little bit more.”

11) Elf (2003): Will Ferrell stars as an adult human raised at the North Pole by Santa and the elves, who goes to New York City in search of his birth father, Walter Hobbs (James Caan). From the first shot of Ferrell in banana yellow tights, you know you’re in for a good time.

12) The Nightmare Before Christmas (1993): Tim Burton’s brilliant stop-motion masterpiece about Jack Skellington, the king of Halloween Town, who discovers a portal to Christmas Town and decides to take over as “Sandy Claws.” What’s this? A multi-holiday classic.

13) Trading Places (1983): Trading Places stars Dan Aykroyd as Louis Winthorpe III, a successful Philadelphia commodity broker with the world as his fingertips, and Eddie Murphy as Billy Ray Valentine, a street hustler (“I have no legs”), who are thrown together when Winthorpe’s employers make a bet to see if switching the lifestyle of the two will change who they are morally. One of the greatest scenes in an already impeccable comedy has Aykroyd shoving an entire salmon into his filthy Santa suit. Looking good, Billy Ray. Feeling good, Louis.

14) Gremlins (1984): Billy Peltzer is given a very special Christmas present, a Mogwai he names Gizmo, but he fails to follow the three simple rules of care. 1) Keep it away from bright light or you’ll hurt it. 2) Keep it away from water or it’ll multiple. 3) Never ever let it eat after midnight or it’ll turn into one of the cutest horror movie creatures imaginable.

15) White Christmas (1954): Bing Crosby, Danny Kaye and Rosemary Clooney star in this Irving Berlin classic about two song-and-dance duos putting on a show at a floundering ski lodge in Vermont. Who could say no to Crosby and Clooney crooning “Count Your Blessings Instead of Sheep” next to an open fire?

16) Bad Santa (2003): Two conmen who have no interest in spreading good cheer go on a mall road trip posing as Santa and his elf so they can rob stores when the till is overflowing with holiday spending, a plan that gets complicated when they meet an 8-year-old boy who teaches them the true meaning of Christmas. Yeah, it’s heartwarming, but more importantly, everyone loves a drunken Santa who screams at children in the mall food court “I’M ON MY LUNCH BREAK!”

17) National Lampoon’s Christmas Vacation (1989): Wanna feel better about how crazy your family is? Spend some time with the Griswolds, masters of disaster.

18) Meet Me in St. Louis (1944): Set in St. Louis, Mo. in 1903, as the city was preparing for the World’s Fair in 1904, the film about a family uprooting their lives and moving to New York City features Judy Garland singing the timeless classic “Have Yourself a Merry Little Christmas.”

19) The Santa Clause (1994): When Tim Allen accidentally kills Santa Claus on Christmas Eve, he dons the red suit and carries out the rest of the present deliveries. Finding himself back at the North Pole, he discovers he’s now contractually bound to become Kris Kingle complete with white hair, a beard that’s untamable and a massive, sudden weight gain.

20) The Polar Express (2004): Based on the best-selling children’s book by Chris Van Allsburg, a young boy on Christmas Eve is desperate for confirmation and proof of the true spirit of Christmas when a magical train pulls up in front of his house and invites him to the North Pole. Not since clapping for Tinkerbell has a film made us believe so thoroughly in unseen magic.

Honorable mention: Reindeer Games (2000) - The truth is that Reindeer Games kind of sucks, but nothing says “Happy Holidays” like getting to see Charlize Theron’s boobs.