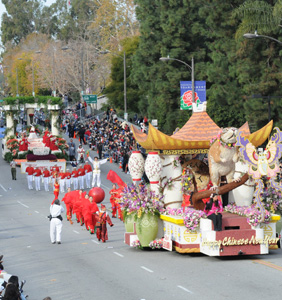 The Rose Bowl, often dubbed America’s stadium, will hold the 95th Rose Bowl Game on Jan. 1, 2009. However, this legendary game is not the only attraction on New Year’s Day in Southern California … the annual and always extravagant Rose Parade kicks off the game each year with floats, equestrians, bands, the beautiful Rose Court, the Grand Marshal and much more.

This Rose Bowl tradition began all the way back in 1890 when the first Tournament of Roses was staged by members of Pasadena’s Valley Hunt Club who wanted to show off their blooming flowers and fruit in California’s mild winter weather. Over the years the festival expanded to include floats and equestrians, and in 1902 a football game was added to enhance the festivities. The first ever post-season college football game was held in the stadium, and Michigan demolished Stanford University 49-0.

Before the football game, people from all across the country come to Pasadena to get front row seats for the famous parade. USC sophomore Anna Denecke recalls driving from Oregon each year as a child to see the parade.

“When I was a kid I was enthralled, the two hour parade was colorful and always impressive,” says Denecke.

It is a huge tradition in Los Angeles for people to camp out several hours, even days, before the parade to get seats.

“Everyone sets out their seats in advance and goes to bed early the night before to prepare for the days festivities,” Denecke says.

The elaborate parade of hundreds of floral floats, talented marching bands and historical equestrians walk a five-and-a-half mile route around Pasadena before the game. The floats have come a long way since the inception of the Tournament of Roses in 1890. Today float building is a multi-million dollar business and float construction begins immediately after the previous year’s parade finishes. With the technological advancement of computerized animation, floats these days have life-size King Kong figures walking and float animals dancing through the streets.

The Tournament of Roses committee approximates that each float is decorated with more flowers than the average florist will use in five years. Applications for floats to be used in the parade are usually accepted more than a year in advance.

Each year one float gets the honor of carrying the Royal Court including the Rose Queen, who presides over the parade and the game, and her six princesses. Every parade also has a Grand Marshall, and in the past some of the world’s most prominent individuals have served in this honored position.

If the parade and all of its extravagance has not convinced you to change your New Year’s Day plans yet, don’t forget the Rose Bowl Game, nicknamed “The Granddaddy of Them All,” has been a sellout attraction every year since 1947. That year the Tournament signed an exclusive agreement with the Big Ten and Pacific Coast Conferences having the Rose Bowl game to be played annually by the winners of these conferences. The Rose Bowl also hosted the National Championship game in 2002 and 2006 and plans to again in 2010.

This year the No. 5 ranked Trojans are Pasadena bound again for the fourth straight year and will face the Big 10 Champion, the No. 8 ranked Penn State Nittany Lions.