BRIDE WARS: Save the date for Hudson/Hathaway’s marital showdown. 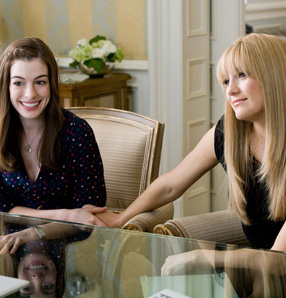 Feminism gets a good swift kick to the you-know-what when two of America’s sweethearts duke it out in Bride Wars. The comedy (written by real life BFFs June Diane Raphael and “Saturday Night Live” performer Casey Wilson) proudly and unabashedly exploits the growing importance of the wedding industry, as well as the cultural phenomenon known as the “Bridezilla.” Lifelong friends Emma (Anne Hathaway) and Liv (Kate Hudson) become mortal enemies when a clerical error at their wedding venue results in both their events being penciled in on the same day.

For some brides, the solution might be a simple one: reschedule for the sake of friendship and sanity. But for Liv and Emma, that just won’t do.

Liv is a high-powered attorney used to getting her way and a second-rate ceremony just isn’t in the cards. And for Emma, a school teacher, her nuptials mark the perfect opportunity to treat herself to a special day of pampering, as opposed to tending to the needs of others.

“Emma is a really nice, loyal friend, and somebody very comfortable standing in the background,” says Hathaway in the studio’s production notes. “But when her wedding day is threatened, she is willing to fight for it. For the first time in her life, she wants to be number one.”

Hudson, who was once involved in a very public marriage to musician Chris Robinson, is no stranger to the highs and lows of planning the big day. Her real-life expertise, as well as her roles as star of the film and one of its producers made Bride Wars a truly rewarding project.

“I really wanted to do a movie that was about women pushing the comedic envelope,” says Hudson. “And what better setting to see this happen than a wedding. I love this kind of comedy and enjoyed seeing how far we could take the humor. It’s a fun story that also has a lot of heart.”

Adding an extra layer and challenge to the already frustrating situation these two dueling divas find themselves in is the other necessary component of the modern day wedding – the support and care of their respective grooms.

For Liv, she finds shelter and loving support from her fiance, Daniel (played by Steve Howey).

“It’s the bride’s day, and the best thing a guy can do is to step back and let it happen,” Howey says. “Daniel’s attitude is to support Liv – and just stand back and let the pieces fall where they may.”

On the flipside of the coin, Emma’s relationship with her betrothed becomes strained, as Fletcher, her hubby-to-be (played by actor Chris Pratt), sees his lady in a new and slightly unflattering light.

“While Daniel is understanding and supportive of Liv, Fletcher is somewhat taken aback by the chaos – and by Emma’s newfound inner strength,” says Pratt.

The writers stress the dynamic of the fighting and competition that occurs amongst the two women.

“Bride Wars is about friendship and the crazy ways in which your best friend – the person who knows you so well – can also bring out the very worst in you,” says Raphael. “And that can be very scary. Friendships are sometimes difficult to navigate, especially when we know exactly where the other person’s flaws and insecurities live.”