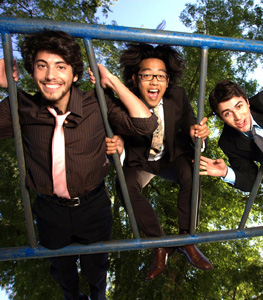 Lady Danville
(Credit: Credit: Piper Ferguson)
When singer-songwriter Sara Bareilles and the members of Maroon 5 attended UCLA, they participated in the all-college talent show, Spring Sing – which features various performances, upcoming bands and musicians – and then went on to become household names.

Two of the bands that performed at previous years’ Spring Sing shows took time out of studying and full-time jobs to share their stories about discovering their future band mates at dining halls, transitioning from the college-band standard to the professional world and the importance of sharing the spotlight. Up and coming Kazai Rex, made up of four current UCLA students, performed in 2007, and Lady Danville, who won the award for Best Duet and Best Overall Entry in 2006, consists of three recent UCLA alumni. Both are still going strong.

Although Capoot, Langa and Duhamel write most of the songs, collaboration is also important.

“I’d say we’re pretty prolific when it comes to songwriting because we have so many people and so many different ways that the band writes,” says Langa. “So we seem to keep piling on songs before we can record them.”

The start: A few members met while jamming in a rehearsal room in a UCLA dorm, another was discovered in a dining hall and another two met at freshman orientation. Even before they had decided on a name, the group performed for the first time at a dorm’s talent show, which they won.

“We won a prize at the talent show and we bought a pile of CDs for our demo and UCLA shot glasses,” says Capoot.

Today: Performing at on-campus events like Spring Sing and fraternity and sorority benefits, they’ve also played at the House of Blues, the Knitting Factory, the Roxy and in Davis, San Jose and even a sex shop in San Diego.

“You should google the Rubber Rose. It’s a sex shop with an attached art gallery. So that was probably our most interesting venue,” says Capoot.

The future: Although the future may be up in the air, one thing is certain: They love what they do.

“We all really love to play. We love being in the band, and we love each other. We have decided that we don’t know what’s going to happen,” says Langa. “It’s just a whole bunch of fun, and we’re just going to keep going until we can’t.”

Fun fact: Each month, on their interactive Web site, Kazairex.com, a different member of the band posts a 10 to 14 song podcast that anyone can download and listen to for free.

“Every song we write is about our own lives, so it’s kind of like a peekaboo into the soul. Quote me on that,” says Frankel, who describes the way they perform as “a trio rather that the typical one dude in front.”

With no trace of ego when they take the stage, the band writes its songs in the same way: A member will bring his idea to rehearsal, and then they all add their own opinions and edits until it becomes the band’s song versus the individual’s song.

“That’s what I love about our music. Everyone has a hand in it,” says Chang.

The start: The three met in an a cappella group they were all a part of while living in the dorms.

“We would write papers for the same class, but we wouldn’t actually get to the writing until like six in the morning because we were always up jamming in my dorm room,” says Garner. “We all were friends and liked music so it happened very organically.”

College to the real world: Since hitting it off, they went onto perform at on-campus events including Spring Sing, which they won in 2006, and the Dance Marathon charity event.

Now with full-time jobs, the musicians are not slowing down, but speeding up the band’s activity, spending just as much time practicing as they are at their day jobs.

Soon they’re going national, traveling to play at campuses in Idaho, Washington, Oregon, Utah and Alaska. While students, Garner admits, it was often difficult to get the ball rolling when it came to making calls and scheduling gigs, sometimes just waiting until asked to play.

“In college, we were able to not take ourselves too seriously and still be pretty successful for what we wanted to be doing at the time, which was play and have some shows and that was it,” says Garner. “But right now … the standards that we’re holding to ourselves are higher, and so that makes it a little bit more difficult but at the same time we can kind of take ourselves more seriously, and so it’s easier to get stuff done.”

The future: When asked about the future of Lady Danville, the trio agrees that to play full time is the dream. A more immediate goal: to open for the artists they most look up to, which include Guster and Ben Folds, and to play for as many people as they can.

“As far as long term, I think we all just want to write really good music,” says Garner.

Fun fact: “We love to play in stairwells,” says Frankel.