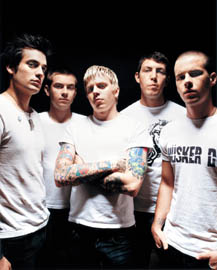 "Do I listen to pop music because I’m miserable or am I miserable because I listen to pop music?" asks John Cusack’s character, post-modern record storeowner Rob Gordon, in the film High Fidelity. It’s a question that seduces the jaded music critic in us all and hints at an industry of hype in which consumers get overwhelmed by the incestuous nature of popular culture to the point that they easily forget why they’re bothering to consume in the first place. It’s a question that more musicians and fans are asking themselves and using as motivation to take popular music back into their own hands, back into their homemade studios and back into the control of the generation that defines it – the youth, not some graying dude twiddling his thumbs behind a desk who hasn’t sweated at a concert in two decades.

Today, when just about anybody can make a record in the privacy of their own bedroom and songs can become hits over the Internet alone, the concept of popular music is changing to include the underdogs, not just the divas, and quickly pushing past previous boundaries that necessitated major label support and payola for radio airplay to reach any substantial audience. Popular music is becoming less about "TRL" and more about DIY. Genres that before were forced underground for lack of label support or the ability to reach a greater audience now find it easier to access the mainstream. In this sense, popular music is becoming less saccharine and more punk. Instead of punk rock bending toward the mainstream, the mainstream has bent toward it. Pop has ceased to be a genre limited to glossy, teen pinups and evolved into a genre that has the potential to be all encompassing.

Punk-rock quintet, The Explosion, embodies this idea of a new popular culture, one assembled from the pieces of deconstructed trends and born from the wreckage of the franchise wars that have defined the past decade. The band’s music, hailed for its ability to be outspoken without preaching and intense without overbearing, speaks of a generation struggling to have a voice loud enough to rise above the white noise of a daily life littered with misplaced messages.

"Our music is about a lot of different things but I would say [something that’s really important to us is] challenging others to look closer, as well as ourselves," says vocalist Matt Hock. "We write about our experiences, what we see around us both personally and in the outside world … any band would probably tell you the same. I think something that sets us apart is that we’re also writing about opening your eyes, seeing what’s going on and really trying to make a positive change."

Since forming on the East Coast in 1998, The Explosion (completed by bassist Damian Genuardi, guitarists Chris Gonzales and David Walsh and drummer Andrew Black) has released three EPs and two full-lengths, the latest of which, Black Tape (Virgin), released last October, serves up a hefty portion of music for both fans and critics to sift through, muse over and analyze. Described as Buzzcocks meets Fugazi meets Husker Du, The Explosion does its best to make the most of its influences without sounding redundant. However, with music that often verges on a call-to-arms, some have been quick to label them as just another politically agitated punk rock band.

"Of course some of our songs are political … we’re living in a time where politics are really important and need to be looked at. If we’re writing about our experiences then how can we ignore that? Political is also personal. But we’re also about a lot more. We’re more about awareness than a specific political belief. People try to label music all the time because it’s important for critics and stuff to be able to classify it. We try not to pay attention to that too much."

Black Tape is The Explosion at its strongest yet. More musically varied than their previous efforts, the album incorporates melody in a way that softens punk’s typical abrasive delivery and allows the music room to breathe, without sacrificing the frenzied, urgent tone and in-your-face attitude that gives the music its edge. It balances caustic screams with actual singing and merges catchy, singsong hooks with down-and-dirty riffs. It’s an album that not only demands fans listen, but also think – balancing musical intensity with informed lyrical content.

"This album sounds better than anything we’ve done before," Hock says. "We’re really proud of it. We put a lot into it and took our time and it’s the best we’ve ever sounded."

"We can be serious one minute and funny the next," furthers Hock. "What’s important is just that we’re trying to express something."

This urge for expression, not only for themselves but for as large an audience possible, was key in prompting the band to sign to major label Virgin Records, after years of putting out their previous releases independently or on indie labels like Jade Tree, Revelation and their own Tarantulas Records. Some longtime fans were quick to criticize the band’s move to a major, but The Explosion insists that the decision was well thought out and worth perks such as greater distribution of their music and funding for both national and world tours to reach more listeners. Additionally, signing to Virgin has given the band the budget to infuse the indie label they started in Boston, Tarantulas, with new energy.

"The label was already going before but it’s really taken off now in the past year since we signed with Virgin," Hock says. "We started it kind of out of necessity for our own music at the time and for all this other great music coming out of [our scene] that wasn’t getting out there, like what our friends were doing. We’ve gotten to put out great stuff from bands like The Lot Six, The Distillers and The Bronx. We’re touring so much now that we have other people running it back home [on the East Coast], but we’re still involved."

The Explosion has not only taken songwriting and performing into its own hands, but it also stands as an example of a group of modern musicians who didn’t hesitate to get involved in the business of popular music, all the while staying true to their roots and making their music something we can finally rock out to.

Black Tape is currently available. The Explosion will play a BBC Radio One show at The Whisky, in L.A., with Jimmy Eat World and Finch on Tuesday, March 29. For more information, visit www.theexplosion.net.