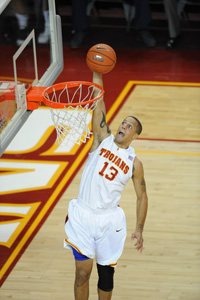 USC’s Daniel Hackett slams one in.
(Credit: Courtesy of USC Sports Information)
Once upon a time, USC was considered the class of college basketball in Los Angeles. Of course, that was more than 50 years ago.

The Bruins come into Galen Center with an eight-game winning streak, but the Trojans are 8-0 at home. Something has to give.

Starter Alfred Aboya can probably keep up with DeRozan, but UCLA needs its own blue chip recruits in Drew Gordon and J’mison Morgan to be a factor off the bench. If not, Gibson may have his way inside and counter UCLA’s perimeter game.

The difference will come down to defense and performance under pressure. USC defeats its opponents by an average of 11 points, but is 2-3 in games decided by less than five points.

Conversely, the Bruins are a defensive juggernaut, defeating opponents by nearly 19 points per game. Ten of UCLA’s 12 victories have been by 10 points or more.

The game will be a nail biter, coming down to the final three minutes – which gives an edge to UCLA. Bruins will win by eight.