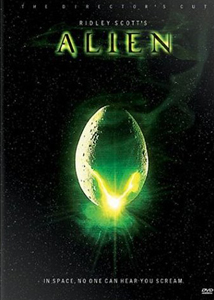 Before E.T. made us want to feed them Reese’s Pieces, and long before Independence Day had us fearing their imminent takeover, a well-toned Sigourney Weaver kicked the ass of an aggressive extraterrestrial in the best alien movie of all time, aptly titled Alien.

As the first film in the famous Alien quadrilogy, 1979’s original follows the spaceship Nostromo as its crew tries to defeat a 7-foot, 2-inch creature that looks like a gooey, recycled wrought iron fence. With grotesque special effects and props dripping with slime, director Ridley Scott (Gladiator, Black Hawk Down) creates a disturbingly realistic setting for the futuristic space takeover.

After discovering a decrepit spaceship filled with abandoned alien eggs – one of which explodes into a giant claw made of pig intestines and latches onto John Hurt’s face – Sigourney and company become the Alien’s prey and are systematically eliminated by the feral creature running loose on the ship. One colleague is used as a host body for the full-grown monstrosity, the Science Officer turns out to be an android and nearly everyone else is stalked and killed by the Alien’s fully extended inner mouth.

With tentacles creeping around every corner and a high-pitched squeal that sends dogs to the moon, the Alien with acidic blood is the scariest drooling villain of the ’70s. And like the Haunted Mansion ride at Disneyland, Alien should only be watched after dark and, thankfully, the Nuart Theatre’s Cine Insomnia series has made that possible with a Friday night midnight showing of this science fiction thriller.