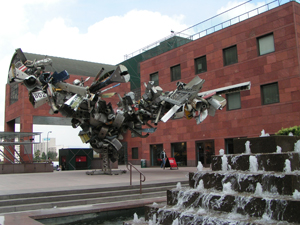 For MOCA – the Museum of Contemporary Art – to ‘go out of business’ is simply not an option. Nor should it, as has been proposed, merge with LACMA, the Los Angeles County Museum of Art.

MOCA’s charm, and strength, has always been its autonomy. While the museum has relied upon some of the same donors as LACMA – indeed, Eli Broad has offered a $30 billion donation to keep MOCA afloat – the only evidence is the names on the gallery walls, not the constantly changing art within them.

While there is, yes, the Geffen Contemporary – of which Michael Govan, director of LACMA, said, “A key element of the [merger] proposal is to keep the Geffen open all the time. We could work together ... to think about how to utilize these spaces. Right now, the No. 1 spot is Grand Avenue, the No. 2 space is Geffen; we might reallocate space in a very different way” (What would, then, happen to MOCA proper on Grand Avenue, one supposes.) – the Geffen has housed such groundbreaking shows as WACK! on feminist artists, the trippy Ecstasy: In & About Altered States, and my first, and favorite, MOCA production At the End of the Century: 100 Years of Architecture.

Unlike BCAM (The Broad Contemporary Museum of Art), which merely houses Eli’s collection, none of which has been actually bequeathed to LACMA, the Geffen rarely showcases the private trophies of the music mogul. Even with its phenomenal temporary instillations (e.g., Tim Hawkinson, René Magritte, Breaking the Mode, Charles and Ray Eames), LACMA’s potency is in its inveterateness; I can always take visitors to see a favorite piece, knowing just where it is on the second floor of the Ahmanson Building.

Each museum has its forte and Los Angeles needs its own, independent, Modern Art museum. In upcoming weeks, look for additional rallies of support, donate online or visit one of the current MOCA-esque exhibitions before it potentially loses its ability to add a suffix to its name and mean something.