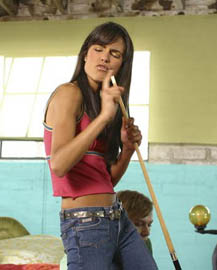 Jordana Brewster has been acting since the age of 15, but until now she’s never played a villain – or a lesbian. She gets to try her hand at both in the new teen comedy D.E.B.S., which premiered at Sundance in 2004 and opens nationwide on March 25.

Brewster says she was immediately sparked to the film’s unique combination of action, comedy and romance in a high school setting.

"I thought it was really original. At first I didn’t know if it was supposed to be a big-budget action movie because it was spoofy. But the tone was right … so I met with Angela [Robinson, the director] and her producing partner Andrea [Sperling] and I just really liked them," she recalls.

At that point, Brewster was hoping to play Amy, the lead character and all-around good girl played in the film by model-turned-actress Sara Foster. However, Robinson had a different idea.

"When they asked me to play Lucy, I was like, ‘What?!’ because I wanted to play Amy, originally. In real life, I’m more square and a little more like Amy. Basically, I was being a coward," Brewster says with a laugh.

She says her reluctance to take on a villainous role stems from a longtime fear of overacting. However, she liked the project enough to take a chance on the role.

"The only reason I was afforded that luxury was because of Angela," Brewster explains. "I knew she was like the [safety] net. If I did something ridiculous or stupid or off-base she wouldn’t put it in the movie. I knew that."

Lucy’s sexual preference was less of a concern, and again Brewster felt safe in her director’s hands.

"There are some things I won’t do, like fake an orgasm on screen. When you meet Angela you know she’s not going to exploit you; she wouldn’t harm a fly. I trusted her," Brewster says.

D.E.B.S. marks Brewster’s return to feature films after a break to study English at Yale University. Her decision to pursue higher education followed her big-screen debut in The Faculty and her breakout role in The Fast and the Furious, exactly the point when many agents would pressure their clients to keep their career momentum going instead of taking a break. Brewster says she was never concerned with being out of the spotlight.

"I needed the experience, some people don’t. Some people feel they’re curious enough and confident enough that they don’t need it. But I did, so I’m happy I went. I wasn’t annoyed when I lost [film roles] or when I wasn’t in magazines," says Brewster.

She also feels that being selective in her film choices isn’t such a bad thing.

"I was witness to that whole phenomenon of the Kevin Williamson boom and young actors making millions, doing 20 movies back-to-back and then they sort of fizzle. I love acting, there’s nothing else I want to do."

Next up for Brewster is the big-budget Disney romance Annapolis opposite James Franco, which is scheduled for release later this year.