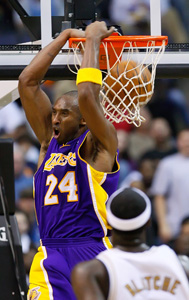 (Credit: Harry E. Walker/MCT)
Even though the holidays weren’t that great for the CLIPPERS, they opened the New Year with two solid efforts against high caliber teams: losing by eight points Jan. 2 at Phoenix and by just one point Jan. 4 against the Pistons at Staples Center. But the squad (at 8-25) has yet to live up to the hopes many have for it.

Fans were thrilled when former Bruin Baron Davis returned to his native Los Angeles at the start of the season, but injuries have plagued the stellar point guard. Spirits raised with the acquisition of power forward Zach Randolph in November, a move that could eventually make up for the crucial loss of Elton Brand if Randolph (averaging 22 points and 11 rebounds) continues to play to potential.

With the addition of Davis and Randolph, the Clippers have yet to gel as a cohesive unit. They face three tough competitors this week: on the road versus the Spurs (Jan. 8) and the Hornets (Jan. 9) and against the Suns Jan. 11 at home.

After two disappointing losses and a serious knee injury to backup point guard Jordan Farmar (averaging 7.9 points and 2.4 assists in 19.6 minutes) in Florida, yuletide cheer came early for the LAKERS with wins on the road in Memphis Dec. 22 and New Orleans Dec. 23. A 92-83 Christmas Day victory against the Celtics brought the home crowd to its feet in a rematch of last season’s playoff finals.

The Lakers continued with a resounding win over former teammate Ronny Turiaf during his first time back to Staples with new team the Golden State Warriors Dec. 28. But Golden State was not only missing the scoring fire of Corey Maggette (out since early November with a strained hamstring) but the defensive intensity the team showed in its 99-89 Dec. 26 victory at home over Boston.

With Kobe Bryant scoring 31 points in 32 minutes of play, the Lakers came out over the Warriors 130-113. Derek Fisher followed Bryant with 19 points and Sasha “the Machine” Vujacic with 17, while Pau Gasol chimed in with 13 points, nine rebounds and seven assists and Andrew Bynum added 13 points and 10 rebounds.

The Utah Jazz fell to the Lakers 113-100 Jan. 2. While Bryant scored 40 points, it’s his chemistry with Gasol in particular that is noteworthy. Their combined, off the charts basketball IQ and trust in one another have made them into one of the league’s most explosive duos.

Lakers forward Trevor Ariza had an exceptional finish to the game, with two steals and two baskets in the last few minutes. Ariza’s performance overall this season has been fantastic, and he made his first appearance in the starting lineup against Portland Jan. 4. The Lakers’ solid defense in the third quarter resulted in a strong 100–86 finish over the Trail Blazers – their 15th consecutive home court win.

PLAYER OF THE WEEK: KOBE BRYANT

We had to select last season’s MVP as our first pick for ’09. Averaging 26.8 points, 5.3 rebounds and 4.2 assists per game, Bryant is on his way to another remarkable season. Moreover, he has developed into a true captain of this team. One of the best players the league has ever seen is becoming one of its best leaders.