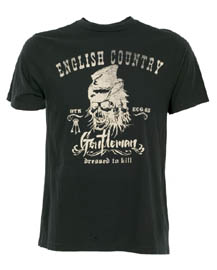 Celebrity sightings are nothing new and out of the ordinary for many Angelenos. But when you’re bumping shoulders with rock stars like Linkin Park’s Chester Bennington and squeezing past "Desperate Housewives’" girl magnet Jesse Metcalfe while sipping wine and eating fancy hors d’oeuvres, you begin to wonder if you’ve accidentally crashed a VIP Hollywood party.

Or maybe that’s the exact vibe and scene that men’s clothing designer Jade Howe was going for when he held a fashion event inside the W Hotel in Westwood. The Orange County-based designer entertained friends, celebrity clientele and the press with a sampling of his latest designs.

Howe showed off six complete outfits from his Indie Executive collection, which featured tattered-looking pinstriped blazers, button-down, long-sleeved shirts and distressed denim, complete with big leather buckle belts. The look was contemporary with a laid back vintage feel. Detailed embellishments, such as small leather pieces sewn on the lapels of tailored blazers were fresh and inventive. The knee-length, pinstriped coat with a matching belt was a crowd favorite

"I feel like with every collection, I’m more and more inspired … The whole concept of the Indie Executive is keeping me inspired," said Howe.

"He’s not afraid to try something even if it may not work," said Church.

Howe described his collection as, "cowboy punk meets English country gentleman rock star," and said his unique approach to clothes is what separates him from other designers.

His designs are versatile enough to attract hard rockers who want a distinctive, edgy look, as well as business savvy men looking for sophisticated, yet trendy menswear.

Some of the guests, ranging in their mid-20s to late-40s, showed up in Howe’s modern tailored jackets, breaking the age appropriate stereotypes that often seem to separate young men’s collections from older men’s.

"Younger guys can wear all the fashions, but really Jade’s designs are catered toward guys with [a] younger mentality … they’re comfortable with who they are so they don’t care what other people think," said guest Paul Parsons.

Perhaps that’s what makes Howe’s designs so universally appealing. Regardless of age, style or background, Howe’s designs seem to complement just about any man. Whether it’s Napoleon Dynamite star Efren Ramirez (who showed up in a signature Howe design) or rock bands Franz Ferdinand and Queens of the Stone Age, who are reportedly big fans, Howe seems to understand what men want and, more importantly, how they want to dress.

For more information about the Howe Signature line, visit www.howedenim.com.

Clothing
Mirror, Mirror: ‘The Force Awakens’ fashion is with you
4,047 views

Clothing
Designer hopes to make ‘made in Jersey’ a fashion statement
1,694 views

Clothing
Frederick's of Hollywood closes all stores, strips down to Web
1,593 views