The Damned: So, Who’s Paranoid? 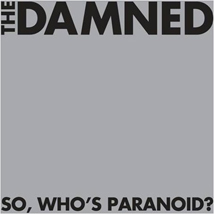 It’s easy to forget that the Damned went through a few transitions between Point A (1976) and Point B (2008). Their humor’s not been lost since the perfect Damned Damned Damned, but then, in their on-off career, they’ve also taken on identities ranging from unlabeled punk to Goth to – dare I say it – pop. So, Who's Paranoid is miles from where they started but is a clear descendent of the slightly stale Grave Disorder (2001), or even the hints of Goth pop appearing on The Black Album or Strawberries.

The Damned certainly peaked with Brian James as songwriter, but they did have a few later gems before apparently jumping the shark, so it’s the unfortunate case that So won’t be the bearer of any.

“Dr. Woofenstein” highlights the croon that Dave Vanian’s still got at 52, but “Since I Met You” brings it to a level just above Richard Cheese. “Shallow Diamonds” is a stale, straight-ahead rocker. “Little Miss Disaster” has too much dated electricity. If only there was a “Wot.”

So, Who’s Paranoid? is currently available.