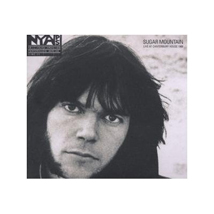 Neil Young’s first solo performance, a low-key acoustic show, came shortly after disbanding Buffalo Springfield at the ripe age of 23. The impromptu set is divided equally between Springfield tracks and the material that would make up his first studio album. They range from the sophomoric, self-consciously psychedelic “Last Trip to Tulsa” to early gems such as “The Loner,” which would remain staples of the prolific songwriter’s canon.

While he wouldn’t really hit his stride until his second album, Everybody Knows This Is Nowhere, this unedited recording provides a fascinating glimpse at a young developing artist. His between song raps, in which he sounds like a slightly befuddled Bruce Dern, show flashes of an understated wit between nervous ramblings (“This is being recorded for, uh, recording purposes.”).