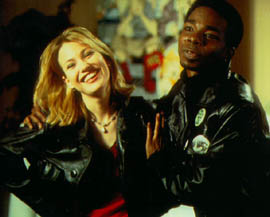 Director Kevin Smith’s View Askew Productions takes over ArcLight’s Cinerama Dome March 28 with the very first Vulgarthon to be held on the West Coast … ever! The popular all-day event, which is held every year in Smith’s hometown of Red Bank, N.J., will feature five films followed by five Q&A sessions over a 14-hour period.

Films to be screened at Vulgarthon include: Smith’s cult classic Chasing Amy, after which a Q&A session will be taped for inclusion on the film’s upcoming 10th anniversary DVD (set to be released in 2007); Brian Lynch’s Big Helium Dog; Jeff Anderson’s Now You Know, which will also feature a Q&A taping session for its upcoming DVD release; the world premiere of Jennifer Schwalbach’s and Malcolm Ingram’s documentary, Oh What a Lovely Tea Party, about the making of Smith’s popular Jay and Silent Bob Strike Back; and, in a purely View Askew-type turn, a super-secret fifth film!

There will be filmmakers and special guests present at each film’s Q&A session. Tickets to the event, which runs all day on Monday, March 28 (10 a.m. to midnight), are $75 per person and include all screenings, Q&A sessions and a special souvenir T-shirt (which you will receive after purchasing your tickets on ViewAskew.com and must wear in order to gain entry into the event). For more information on Vulgarthon, Kevin Smith or to buy tickets, visit www.ViewAskew.com.

The ArcLight Cinerama Dome is located at 6360 W. Sunset Blvd., between Vine and Ivar, in Hollywood. For more information, visit www.ArcLightCinemas.com.