DEFIANCE: How One Group Dared to Be Brave 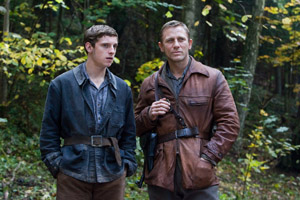 I’m greeted warmly by actor Jamie Bell as I enter a suite on the fifth floor of the Beverly Wilshire Hotel. Bell is holding in his hand what appears to be a cup of coffee or tea – heavy on the cream.

Gone is his normally boyish face; that look has been replaced by a new (and more mature), closely groomed beard. He’s wearing a dark slate blue shirt and finely tailored slacks. From the looks of it, this is a guy who’s grown from acclaimed child actor to accomplished young man at the blink of an eye.

The 22-year old is excited to talk about his latest film, Defiance, which tells a true and action-packed tale of heroism that is largely unknown to most. In it, Bell stars opposite actors Daniel Craig (007) and Liev Schreiber (from the upcoming X-Men Origins: Wolverine) as Asael Bielski.

Bielski and his older brothers, Tuvia and Zus, were instrumental in saving thousands of Jews from concentration camps (and certain death) by moving them into the woods and setting up an entire village there as WWII waged on through Eastern Europe. These brave brothers and their followers held on to their humanity during this time by continuing with the traditions of marriage, having babies and even erecting social services such as a hospital and school.

But make no mistake; Defiance is by no means a story of Jewish pacifism. Instead, it chronicles these partisans (women included) who kicked Nazi ass first and took names later by bearing arms and fighting back.

Bell was drawn to the role, in part, due to the historical significance of the piece.

“I think to truly understand going forward, we have to understand the past,” he says.

He also admits to being deeply moved by the familial aspect of the film.

“Asael idolizes his brother [Tuvia], as many younger brothers do,” says Bell. “Yet, when he sees him faltering, he has the strength to go to him and say, ‘You need to deal with this. You need to get on the straight and narrow and become the person who you said you were going to be.’”

Still, for all his initial interest in the material, Bell admits that he was largely unaware of the Bielskis’ story prior to shooting.

“I was specifically aware of the uprising in the Warsaw ghetto, but in terms of other Jewish resistance, I wasn’t really that familiar. And of the Bielskis’ story? I had no idea. So, as I’m reading the script – first of all, I wanted to find out if it’s a true story – because if it isn’t, it’s a fantastic story; but if it is, this is just incredible,” he says.

Defiance’s screenplay was penned by Clayton Frohman, who also wrote Under Fire as well as The Delinquents. Bringing his words to the big screen is director Edward Zwick and his producing partner, Marshall Herskovitz.

Many may remember seeing the names of these filmmakers at the end of some of the more acclaimed television series to hit the air (“My So-Called Life,” “thirtysomething”). However, this dynamic duo has also been instrumental in crafting a slew of engaging properties for the big screen as well.

With his track record for discovering emerging young talent (Claire Danes and Evan Rachel Wood, respectively), it comes as no surprise that the director would elect to cast Bell in his film.

“He’s so compelling,” says Zwick of his young star.

Schreiber is also quick to heap praise on the actor. He notes that Bell’s background as a trained dancer helped his discipline as a member of the production. Schreiber also marvels at his level of concentration, calling Bell, “remarkable.”

Craig, who is no stranger to the action genre, reportedly gave his fellow Brit plenty of advice when it came to shooting the strenuous action sequences. But it was the camaraderie in between takes that really brought him closer to Bell.

Humor is something few people might think of when it comes to such heady subject matter, and particularly amongst these renowned and dedicated performers. But what many people don’t realize is that Bell is a deftly funny guy.

His humor is astute and sharp and markedly sarcastic. He is effortless at putting those around him at ease.

Although the English-born star has wowed moviegoers in acclaimed projects helmed by Academy Award-winning directors like Clint Eastwood (Flags of Our Fathers) and Peter Jackson (King Kong), he doesn’t rule out tackling lighter fare one day.

“Comedy doesn’t actually pop up for me a lot, I must say. I think you always try to find a lot of comedy in whatever you do,” he admits. “Of course, I’d love to if it was the right thing.”

In the meantime, Bell rang in the holiday season by celebrating with his family in his newly adopted home town of New York City, a place with which he has fallen in love.

“Upon arriving in New York, you feel like no matter where you are, you’re at the party,” he confesses, adding, “I wouldn’t want to live anywhere else.”

He is also enthusiastically awaiting the opening of Defiance and is eager to encourage young people to check the film out for themselves.