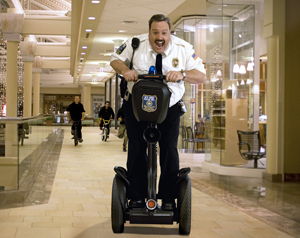 As customary during holiday season, many of us visit our local malls. No doubt, with each visit to that large commercial edifice, there are several uniformed “officers” patrolling these venues of abject consumerism. When we innocently lay our eyes upon such non-assuming individuals, we rarely think of them as bastions of personal protection.

Certainly, many of us would not expect a group of extreme athletes acting as terrorists to take the mall hostage, scheming to cash in on the money holiday shoppers spent. Of course, if such a scenario were to happen in real life, the last person we expect to save the day is a mall-hired, unarmed patrol officer with a portly belly and a 1980s-style mustache.

Yet, such is the plot of Paul Blart: Mall Cop, a lighthearted action comedy opening this week.

“I wanted to make this the most physical project I have ever done,” says Kevin James, who plays the title character Paul Blart, a single, suburban dad trying to make ends meet as a security guard at a New Jersey mall. “We wanted to make this as non-typical as possible.”

Saving the day for James’ performance is the actor’s ability to make Blart likeable.

“I wanted to play a character that I felt very confident about and really connected to,” James says about the title character. “Hopefully, the audience can connect [with Blart] and really root for him.”

An ordinary yet clumsy mall security guard who takes his job seriously, Blart patrols the West Orange Pavilion Mall with a watchful eye.

“We just knew this was a character that could be very funny, engaging and fun to watch,” James says. “He’s an everyday man. The guy’s a hero in the end.”

While we continue to root for Blart throughout the remainder of the movie, Paul Blart: Mall Cop is full of charming moments capable of turning our frowns upside down. There is even quite a bit of adrenaline-pumping action after the extreme athletes doubling as organized crooks take over the mall, featuring a wide array of stunt moves and sequences usually reserved for more serious, big budget flicks.

“When you look at me, I give an action-figure vibe,” James jokes. “It’s innate.”

The concept of making a movie about a mall cop is admirable, while action sport stars doubling as villains and terrorists is definitely a unique spin.

“We just wanted to do a different twist on it,” James says of the extreme sports terrorists. “Instead of typical bad guys, we wanted to really rip up the mall in a way these guys do. It’s something I had never seen before.”

While definitely a heartwarming movie, the ending is relatively predictable, the two major plot twists are not entirely shocking and Keir O’Donnell is not convincing as the mastermind criminal he is cast to play.

But James stands behind this loveable hero.

“This character means the most to me,” James relays. “I’ve become this guy the most. I am most proud of this character. People will identify with him, root for him and go on this journey with him.”