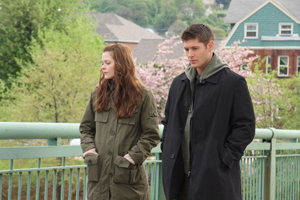 While the horror genre has been no stranger to stepping into that notorious third dimension (i.e. Jaws 3-D, Friday the 13th Part 3: 3D), Lionsgate’s latest release will prove to usher in a new era of energy and excitement into a genre that has become notably stale in recent years. By using the same Real-D technology as techno powerhouse films like< Journey to the Center of the Earth 3D, director Patrick Lussier had the ability to craft a horror film unlike anything you have seen before. This isn’t your parents’ 3D, that’s for sure.

If you didn’t know My Bloody Valentine 3D was a remake, you’re not alone. The original film, released in 1981, could be deemed a cult hit at best as it never quite reached the notoriety or financial success of 1980s Friday the 13th.

More of a re-imaging, My Bloody Valentine 3D stars TV notable Jensen Ackles as Tom Hanniger, who returns to his hometown of Harmony on the 10th anniversary of a brutal valentine massacre that took the lives of 22 people. When town residents once again start dropping dead, Sheriff Axel Palmer (Kerr Smith) grows suspicious of Tom’s motives in returning to his hometown. Sarah Palmer (Jaime King), Axel’s wife and Tom’s old flame, proves to be the only one who believes there may be someone, or something, else responsible for these horrible murders.

It is worth noting that this is the first R-Rated film to use this highly advanced Real-D technology and you can tell that Lussier and company had a real blast stretching the limits of that rating. The gas mask-donning-miner killer is clearly not happy here and, in typical horror film fashion, subjects his victims to horrendous and, often quite amusing, means of death.

With the added dimension afforded by this Real-D technology, the list of objects that fly through the screen quickly adds up. Of course, it wouldn’t be very nice for me to ruin all the bloody fun. Let’s just say the bloodshed is most certainly part of the crowd involvement.

And this single element, crowd involvement, is really what separates My Bloody Valentine 3D from the rest of the flock of other lame, derivative and altogether boring scare films. We are not simply watching a movie but are truly a part of the action.

Simply put, the 3D effects in My Bloody Valentine work shockingly well. The marketing team over at Lionsgate has hyped up the 3D experience here, and with good reason. This isn’t a scam, folks. My Bloody Valentine 3D is not simply a good time at the movies, it’s an all out, theme park caliber thrill ride.

When it comes down to it, My Bloody Valentine 3D gives you a bang for your buck value that few films can even touch. While the dialogue may be a bit cheesy and the acting a bit stiff, all this adds up to what could prove to be the most entertaining film of the year.

Guilty pleasure? Maybe, but in an Oscar season clogged with pretentious overachievers, sometimes all a viewer needs is some outrageous and highly entertaining three-dimensional fun. You would have to be dead not to have a rousing good time.