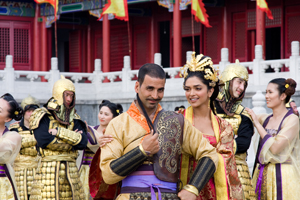 The plot is Bollywood … and kung fu … at the same time!

Warner Bros. combined the Indian and Chinese movie industries in Chandni Chowk to China. For the first time ever, martial arts play an integral role in a Hindi film.

“This is the first Hindi movie where [kung fu] is integral to the plot,” the film’s director, Nikhil Advani, explains. “The entire movie is about finding kung fu and finding yourself.”

“This movie introduced India to kung fu,” says Kumar, whose passion for martial arts and film ran so deep, he accepted the lead role on the condition that Advani come to his home each morning at 6 a.m. to watch one of Kumar’s 300-plus kung fu-type movies.

Thankfully, Advani relied upon Kumar’s lessons to connect the best elements of Indian and Chinese cinema.

Welcome to Chandni Chowk (literally, “moonlit square”). In the shadows of Delhi, India, Sidhu (Kumar) was a lowly vegetable cutter who yearned for more. He played the lotto, sought advice from astrologers and tarot readers and even believed in a magic potato.

In his quest to find meaning in his life, Sidhu stumbles upon two Chinese villagers who believe he is the divine reincarnation of a kung fu legend, brought back to save them from a ruthless gangster.

“He [Sidhu] doesn’t believe in hard work,” Advani says of Kumar’s character. “He believes in short cuts. He has a voice that tells him he will meet a lot of difficulty if he takes shortcuts. But his journey is to gain an understanding.”

The naïve Sidhu apparently thought there was something bigger waiting for him in the shadows of the Great Wall of China. His lack of self-pride took him on the most unlikely of journeys – from Chandni Chowk to China.

“If you see any kung fu movie, it is always about someone finding himself,” Advani says. “We all feel like we are caught up in this rut, and we need to get out of our daily routine. In the case of Sidhu, his rut is that he wakes up and cuts vegetables, and he doesn’t want to do it. He believes bigger things are waiting for him.”

Co-starring Deepika Panukone, Gordon Liu, Ranvir Shorey and Roger Yuan, Chandni Chowk to China is a madcap journey paralleling Kumar’s actual life – he started off as a cook in a small Thailand restaurant before learning martial arts and pursuing a path of Bollywood greatness.

Similar to Kumar’s life, Sidhu underwent his own transformation in Chandni Chowk to China, starting off as a cook and eventually finding greatness.

“The plot is different from my life,” Kumar says. “But, the character is the same.”

In what is considered a revolutionary film for Bollywood standards, Chandni Chowk to China offers stunning visuals and action sequences never seen before in India and only seen in productions such as Kill Bill and Crouching Tiger, Hidden Dragon. A trend-setting movie, Chandni Chowk to China will open the door for a new genre of international filmmaking. No doubt, this action-comedy will find fans all around the globe.

“I’m not sure if Bollywood and kung fu will be together in several films, but this movie does open the door to combine elements from other genres,” Advani tells. “I think the trend has already started.”

With an original score of eclectic Indo-Chinese beats, a lovable hero, funny dialogue and amazing action, Chandni Chowk to China is a must-see for Bollywood and kung fu fans alike.