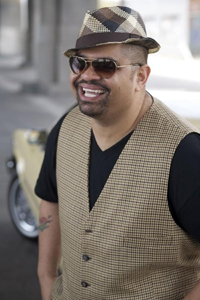 The overweight lover has returned and while the “overweight” part isn’t quite as accurate as it used to be, the lover is well represented in Heavy D’s latest Grammy nominated album Vibes. Though he may be more familiar as a rapper, the former leader of Heavy D and the Boys goes back to his Jamaican roots with a sweet and romantic reggae album.

The inspiration for Vibes comes from many of the ’80s and ’90s reggae greats such as Josey Wales and Yellowman, not to mention the memories of how Brigadier Jerry would have dances that would go on for literally 24 hours straight with only him on stage.

“The texture of the music was pure ... raw,” Heavy says with much affinity.

His appreciation of that culture is truly heartfelt and is reflected in the album.

The change from hip-hop to reggae isn’t a flight of fancy. Heavy is not the type of person or artist to simply switch up styles to cater to a market. He’ll only put out something if it’s an honest part of him.

When mainstream hip-hop’s attention was more about gangsta and bling tracks, Heavy decided to shift his focus towards his other two passions, fatherhood and acting (both television and stage), rather then attempt to “fit into a space and a culture that [he] didn’t belong.” Granted, he didn’t leave music completely.

He also took some time to produce tracks for Jay-Z and Lenny Kravitz as well as Beanie Sigel. It wasn’t until about two years ago that he felt it necessary to work on his own album.

After lending his production talents to other musicians and having a successful acting career, which included recurring roles on “Boston Public,” “The Tracy Morgan Show” and “Bones” to name a few, Heavy felt the need to “artistically vent.” He had things in him that he needed to get out. With hip-hop being such a prominent force in his life, that form of expression is one that couldn’t be suppressed for very long.

Growing up in Mt. Vernon, N.Y. left Heavy well within earshot of the birth of hip-hop in the neighboring Bronx in the mid ’70s. While he may not have been old enough to go to the parties at the time, it wasn’t more than a week before he got his hands on tapes from those parties and would sit in front of his tape player for hours listening, until the tape would snap.

At which point he would cry. He was only in second grade so that was understandable. He was comforted to know there would be another party real soon and those tapes would find their way into his hands.

That tradition of good music disseminating through the masses is something that he hopes to embrace with Vibes. A buzz that’s created organically without a full frontal mass media assault is something that he feels is more comfortable and has a longer lasting appreciation.

He could have come out guns blazing shouting about the new hotness with no objective opinion on the subject, however, he would rather you get to know it for yourself and understand it on your own terms. Now that’s not to say there aren’t any objective takes out there whose valued opinions are supportive.

Vibes is nominated for a Grammy and USA Today, LA Times and VIBE magazine have all given it glorious reviews. But again, that’s their opinion. If you really want to get to know Heavy D’s latest album you’ve got to feel it for yourself and of course, not be afraid to spread the love.