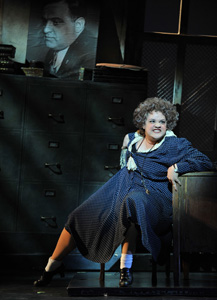 America’s beloved Broadway musical “Annie” is back for a 30th anniversary tour, giving a new generation the chance to experience this classic, optimistic show.

Lynn Andrews will make her L.A. onstage debut as Miss Hannigan. A musical theater aficionado, Andrews chose the topic as her course of study at the American Musical & Dramatic Academy in New York.

She auditioned for everything there was to audition for, propitiously landing a spot in the Happy Sunshine Kung Fu Flower musical troupe/ensemble, mostly performing sketch comedy and musical numbers. She accompanied a friend to the audition for “Annie,” modestly hoping to be cast as ensemble or understudy, but not expecting much, and was quite ecstatic when she was offered the role of Miss Hannigan and the opportunity to go on national tour for 14 months.

On playing this infamous role, Andrews states, “I enjoy all the material I get to do. It’s fun being mean to the kids. They’re all sweet kids, good sports, and it’s all in good fun.”

Her solos include “Little Girls,” basically Miss Hannigan’s lament, cursing her life and feeling sorry for herself; and “Easy Street” in the style of New Orleans jazz music, portraying the plot to steal money from Oliver “Daddy” Warbucks.

Andrews feels the show is timely, contemporary and relevant to today’s political climate. “In particular, the piece ‘We’d Like to Thank You Herbert Hoover’ could easily be compared to a tribute of sorts to George W. Bush,” offers Andrews. “It’s a sarcastic number, saying thanks a lot, buddy!

“If you’ve never seen ‘Annie,’ or if you’re a huge fan already, you’re in for a blast.”

And you can bet your bottom dollar on that!