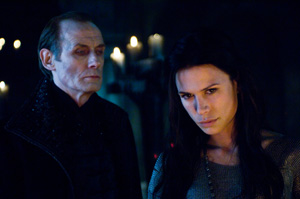 The holiday tent pole releases are shedding screens, the award contenders are expanding and studios are dumping their long-shelved, critically reviled or contractually obliged movies into theaters. And they all will probably make money. It must be January.

Every year it is safe to predict only a few things about the month. An urban drama will be released to capitalize on Martin Luther King, Jr. Day. A fat suit or fat-themed comedy will be No. 1 at the box office. Another Underworld movie will come out.

An incoherent crime drama will be dumped in theaters. A low budget fantasy movie will be ignored. A horror movie with an intriguing premise is revealed to be only smoke, mirrors and a good marketing campaign.

This January is no different. Paul Blart: Mall Cop looks to deliver the fat-themed, slapstick comedy. Notorious illustrates the life of the deceased rapper the Notorious B.I.G. An Underworld prequel will hit theaters, Underworld: Rise of the Lycans. Early buzz and long delays on Killshot seem to indicate that it will indeed claim the mantle of the incoherent, January crime drama. The Unborn seems to be channeling White Noise and Cloverfield in building an intriguing marketing campaign and then forgetting to have a plot. Inkheart will be the ignored, low budget fantasy.

January seems to reveal the glaring inconsistencies of Hollywood – the promise and pleasure of viewing the glut of award contenders jockeying for position at the Academy, and the anger (OK, annoyance) of being duped into seeing a shoddy release. At no other time of year does your local movie theater showcase the best and worst of Hollywood.

Slumdog Millionaire will be playing alongside Hotel for Dogs and the horror spectacle My Bloody Valentine 3-D. Acclaimed directors such as Clint Eastwood, Sam Mendes and Danny Boyle will be promoting their movies alongside Steve Carr (who brought such classics as Daddy Day Care and Are We Done Yet? to life).

At least this year moviegoers won’t have to stomach an annual Uwe Boll release. Boll has duped January audiences in ’05, ’06 and ’08 with ridiculous videogame adaptations of Alone in the Dark, BloodRayne and Dungeon Siege. His presence will be missed, but surely his place will be filled by any one of the multitudes of movies dumped in this month’s cinematic wasteland.
Article posted on 1/14/2009
This article has been viewed 1656 times.