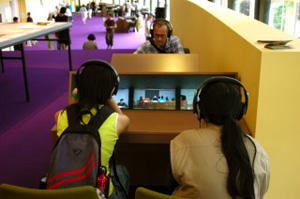 Next Tuesday, America will inaugurate one of the most anticipated presidents in history, but if you’re already getting a case of nostalgia for Bush’s aggressive foreign policies, there are five days left of REDCAT’s video installation, “9 Scripts From a Nation at War.”

As the brainchild of five local artists, “9 Scripts” was originally commissioned for the German exhibition “Documenta 12,” but easily found relevance in our final days with Bush. It’s a multi-channel video installation that addresses the role of identification in our understanding of the war in Iraq and especially tackles the process by which language choice affects the identity of those involved.

How is someone considered an “actor?” A “correspondent?” An “artist?” A “civilian?”

Through both staged and obtained footage, “9 Scripts” is more than a glimpse into the creation of propaganda, it’s a comment on our infatuation with language in general, and exposes how both actively and passively, the words we use are helping to create power structures – especially in times of conflict.

If you missed last Saturday’s five-hour reading of Guantánamo Bay tribunals – or the last two months of identification exploration ¬– don’t worry. All of the tribunals are available on the Department of Defense’s Web site, and there is more than enough time to catch the free exhibit before it gets filed for the history books.