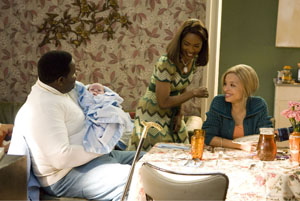 Jamal “Gravy” Woolard is awesome in his portrayal of Bed-Stuy rapper Biggie Smalls. The fellow Brooklyn MC not only raps hardcore, but he evokes the spirit of Notorious.

It’s hard to portray a well-known, well-loved celebrity; to capture his smile, charisma and mannerisms. And while Gravy obviously can’t make his eye lazy like B.I., he does make the world fall for Biggie all over again.

The fact that the film is produced by Big’s mom, Voletta Wallace, Bad Boy founder Sean “P. Diddy” Combs and Big’s two managers, Mark Pitts and Wayne Barrow, lends a true mark of authenticity to the screenplay. What you see is pretty close to what actually happened (if not what really happened), which makes the film that much more exciting to watch.

The twisted irony is that his album titles (his second CD – a double-disc – was released 15 days before his death) predicted his destiny: Ready to Die and Life After Death.