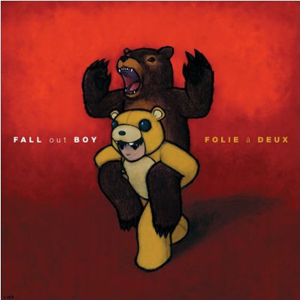 Hate on Pete Wentz as much as you will, but the poster boy for pop punk is at the helm of MTV empires and Gen Blog audiences across the (message) board. Coming closer to topping pop punk juggernauts Green Day and blink-182 with each subsequent release, the men of Fall Out Boy have finally broken out of the awkward puberty stage and into their undoubtedly most mature stage.

Folie À Deux sees an experimental Fall Out Boy auditioning for a third-string spot in Sgt. Pepper’s Lonely Hearts Club Band. Their overall sound has never been so overproduced, so overblown, so over-elaborate – or so overlooked.

The ambitions of Folie are blatant, but somehow easily missed. The multilayered, complicated compositions FOB aimed for backfired, instead drowning out the minute details the band obsessed over.

Even luminaries Elvis Costello and Debbie Harry, along with hot boys Lil Wayne and Pharrell, go virtually unheard on their guest appearances. Still the fact that FOB was able to enlist the second most famous Elvis and Blondie herself only best exemplifies where the band stands in the cultural hemisphere.

But perhaps the ultimate vision for Folie was too ambitious for Wentz. Better yet, perhaps Folie À Deux was Wentz’s attempt to impress a future teen Bronx Mowgli, or at least save him from a few ass kickings in middle school.