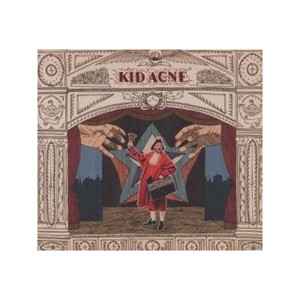 Kid Acne is a British hip-hop artist who’s been on the scene for over a dozen years, and he’s had plenty of time to polish up his act. Why then he starts Romance Ain’t Dead with a Beastie Boys rip-off called “Eddy Fresh” is a mystery; the song sends the message that there isn’t anything original going on here.

That message, fortunately, is misleading and the party quickly gets started with the punk flavored “Oh No You Didn’t.” “Don’t Pity Me” is an effects laden number that like much of the album has its nerdiness countered by the coolness of Kid’s heavy accent; the fact that Acne often sounds prim and proper while he’s waxing streetwise just adds to the fun.

Kid leaves the hip-hop sound in the dust (and also comes up with one of the album’s best songs) as he fires up a barrage of fuzz guitar for the “oi” flavored garage rocker “Fcuk All Lately,” but the album closes with two more numbers that pay homage to the Beasties: “Shut Your Mush” and “Sliding Doors.”