PUSH: Chris Evans becomes one of the movers and shakers. 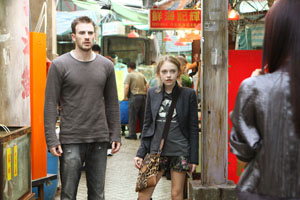 In the vast sea of showbiz mediocrity, Chris Evans’ career shines brighter than gold. The 27-year-old actor has wowed millions with his versatility in roles as a hotter-than-hell superhero (Fantastic Four), a seedy, drugged-out hipster (London) and as the guy-next-door male lead in a romantic comedy (The Nanny Diaries). His latest film, Push, gives the star yet another facet to his dynamic characterizations.

As Nick Gant, Evans takes on the role of a second generation telekinetic –otherwise known as a “mover.” Nick’s father is murdered by a scheming government agency known as the Division. He must now hide underground to save his own life. What better place to blend in with the masses than in Hong Kong – one of the most populous cities in the world.

However, Nick is soon forced out of hiding when Cassie (played by Dakota Fanning) seeks his assistance in uncovering a briefcase containing a highly valuable commodity. Cassie is a “watcher” or a clairvoyant. She can see the future and paints vivid portraits of the outcomes of various scenarios.

But to snag the case, the two will also need to find Kira (Camilla Belle). She’s a “pusher;” her power enables her to implant thoughts in the minds of others.

Kira is the only known survivor among the slew of experimental test subjects at the Division. This puts her on the top of the agency’s most wanted list.

As the trio makes their way through the streets of Hong Kong, they are chased by a crafty local crime family as well as a corrupt Division agent (played by Never Back Down’s Djimon Hounsou). It’s a constant battle of intellect, will and strength to see who will make it out alive and more importantly, who will end up with the case.

Evans had an immediate attraction to Push from the get-go.

“I think it was sitting down with Paul [McGuigan],” he says.

Evans loved his director’s approach to the project – everything from his insights into the characters to his use of gritty cinematography and handheld cameras. But it was also the familiarity of the subject matter and telekinesis that really moved the actor.

“I didn’t really need convincing that telekinesis existed,” he confesses. “For me, it was just kind of tapping into my childhood.”

The star has held a years-long fascination with the action/superhero/sci-fi genre, so he conducted little to no research to develop his character. One thing he did rely upon was the generosity of his other actors.

Playing alongside Fanning (who is highly accomplished in her own right) was a wonderful experience for Evans.

“I love her to death. She’s so talented and so successful at such a young age,” he admits.

He also credits the actress’ parents with giving her a strong foundation in which to build her craft.

Evans equally heaps a large amount of praise on Hounsou.

“He’s unbelievable,” says the star. “[He’s] an Academy Award nominee! When he walks on set, I think everyone’s aware of his presence.”

Evans longs to continue his winning streak of collaborating with Hollywood’s best and brightest. He names James Cameron, Wes Anderson, Paul Thomas Anderson, Michel Gondry and Edward Zwick among the directors with whom he’d love to work.

Still, with his ambitions and eye toward success, he’s not about to lose too much sleep over his future prospects within the entertainment industry.

“I would just like to be breathing, really, at the end of the day,” admits Evans. “But who knows? Not knowing is just part of the ride.”

Interviews
Ai Weiwei on activism in the US, his art response to COVID-19 and a secret Wuhan film
463 views

Interviews
James Bond producer: 007 ‘can be of any color’ but never a woman
1,778 views

Interviews
For Martin Scorsese, making ‘The Irishman’ was about ‘learning to die’
1,411 views

Interviews
Maleficent doubts her fitness as a mother. So did Angelina Jolie
1,026 views
bid=||