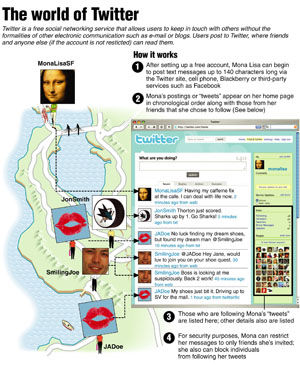 Twitter is yet another social networking Web site that brings us one step closer to a simultaneous virtual coexistence. Want to know what your crush is doing tonight? Check out Twitter. The whereabouts of your favorite taco truck? Twitter. Instant updates from your favorite blog? Twitter.

So what sets Twitter apart from Facebook, MySpace, Radar and all the other social networking applications out there? Well, not a whole lot.

Twitter, by definition, is a micro-blogging service, which allows users to send and receive 140-word updates, or ‘tweets.’ Pretty much exactly like a text message, away message on AIM or Facebook ‘status;’ the only difference is that it is limited to no more than 140 characters and is supposed to be an update on your current location and activities, i.e., where you’re drinking, who you’re with, what you’re eating, where you’re headed next, etc.

You can specify which friends you’d like to follow, or get updates from, and they all show up on your homepage in chronological order, like the Facebook mini-feed. You can look up friends to follow and add a picture and a 160-word bio to your profile – all the micro-blogging essentials. You can also set it up so that your updates are private, so if you don’t want anyone but your bestie to know that you’re watching TMZ in your underwear, that’s no problem.

Ideally, your friends can check up on your updates via their cell phone or other mobile device, but if you just use Twitter from your laptop it’s not very effective or useful. It doesn’t save any time to look up someone’s profile on Twitter versus on Facebook or to simply IM them online, which will at least guarantee feedback.

Twitter is designed to help you stay connected to your friends “in real-time,” like so many other social networking devices. This is great and all, except that it requires everyone to play along. Until we live in a world where everyone has an iPhone (a world fast descending upon us), I don’t see how this can happen.

The only thing Twitter has proven to be useful for in my humble life is chasing the dragon, i.e. tracking down the Kogi taco truck; the Kogi Twitter page allows me to keep tabs on the truck and see when they’re headed to my neighborhood. Then again, I don’t have a cell phone with Internet, so I only check Twitter when I’m on my PC, which defeats the purpose of the Web site.

In addition to this fault, not enough people use Twitter yet for it to have real benefits. In the Los Angeles Loyolan, Chris Lesinski writes that there was never a dull moment the summer he spent in San Francisco where all his friends were using Twitter – “all his friends” being the operative phrase there.

Twitter newcomer Tyler McClain says of the micro-blogging phenomenon: “[It] still strikes me as unessential. I can’t help but feel like I’m talking to myself.”

So is tweeting worth your while? That’s up to you, I suppose.

If you and your inner circle of friends all get together and dedicate yourselves to active tweeting, it could very well improve your social lives. However, if you jump into it alone, don’t expect much beyond a mini-feed of happy hour and dinner notifications from a few friends.

Do you really want your friends and foes to know what you’re doing at every waking moment (and when you cease to be waking)? I’d say a touch of mystery holds the key to a better social life over a tweet about your dinner plans.