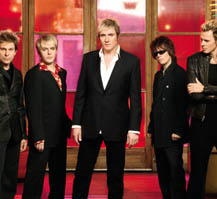 Simon LeBon had no worries that the reunited Duran Duran would get along.

"I knew it was going to work on a friendship level," said the still-charismatic frontman from his home in London. "But I didn’t know if it would work live until we stepped onstage in Japan. It was all this buildup and hype. But when we got up there and started doing our job, it was immediately apparent."

It was a long time coming, too, as the five original members of the group hadn’t shared a stage since 1985’s Live Aid. The kissed-and-made-up Duran Duran has hit the road again.

Twenty years down the line, does LeBon look out into an audience of the same screaming girls who used to fill their high-school lockers with pin-ups of the band?

"We’ve always had lots of different kinds of people who like us," sniffed LeBon. "We do inspire passion, I think. Maybe it’s because that’s what our songs are about – about feelings and about being extreme."

The early days of Duran Duran were all about being extreme. The five members – LeBon, keyboardist Nick Rhodes and the trio of Taylors: bass player John, guitarist Andy and drummer Roger – conquered the world in the early ’80s. Their telegenic good looks and savvy, trashy songs made them the first superstars of the MTV era.

But after three albums and numerous spins around the world, the group began to splinter. Roger Taylor left to become a farmer, followed by a solo-career-minded Andy Taylor. By 1997, the lineup was down to just two founding members, LeBon and Rhodes. Duran Duran’s last big mainstream single, the ballad "Ordinary World," hit the charts way back in 1993.

It made perfect sense, then, when LeBon and company reunited in 2001. They spent the next few years in and out of studios, working on the songs that would eventually make up last year’s coolly received Astronaut.

Even though LeBon is proud of the album, he’s realistic about what audience members are seeking from the 21st-century Duran Duran.

"I’ve always thought it was a huge mistake to refuse to play the things people want to hear," he said. "People are paying money, and you want to make them feel good, not shove a new record down their throat."

Thus Duran Duran’s current set list arrives heavy on the hits, from "Girls on Film" to "Notorious" to "Come Undone," with a handful of newbies sprinkled between.

Still, LeBon said recent tracks like "Bedroom Toys" seem to be connecting with his audience. And this isn’t just another nostalgia trip – LeBon said the band is already working on another new studio album.

The recent success of Franz Ferdinand and The Killers – bands that borrow heavily from the new-wave ’80s – bodes well for Duran Duran’s future.

"I love The Killers," LeBon said. "I love that they’re so obviously influenced by us, but I think they sound really good, too. There’s a certain naive optimism that’s crept back into music. That’s exactly what we had – a sense of wonder and joy.

Astronaut is currently available. For more information, visit www.duranduran.com.
Article posted on 3/29/2005
This article has been viewed 2848 times.