Will the Lakers Sink the Clippers? 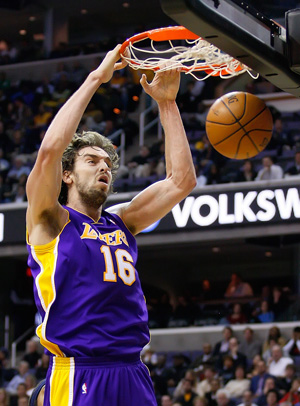 The CLIPPERS (9-31) ended their 12-game losing streak at home Saturday, beating the Bucks 101-92. It was a nice dose of revenge for the team since the Dec. 20, 85-119 loss in Milwaukee was actually the first game of their slide.

The win was a bittersweet one, though. The Clippers lost center-forward Marcus Camby (the No. 2 rebounder in the league) to a sprained left ankle a few minutes into the fourth quarter. However, the squad pulled through in the final six minutes of the game, shooting 54.5 percent (the first time it has shot 50 percent or better this season).

Camby, currently listed as Day-to-Day, joins the ever-growing list of Clipper power players currently on the injured list. Baron Davis, Zach Randolph, Chris Kaman and Mike Taylor are all out of commission.

With so many players out, rookie center DeAndre Jordan made his first NBA start against Minnesota Monday at Staples, alongside fellow rookie Eric Gordon (G). Although Jordan scored eight points, blocked six shots and pulled down 10 rebounds and Gordon led the team with 25 points, it wasn’t enough to pull off another win against the 13-26 T-Wolves. (The Clippers defeated them 107-84 in Minnesota Dec. 6.)

The Clips need all the strength they can muster to face the 32-8 LAKERS tonight, the third time the L.A. teams face each other. The Clippers lost both previous games (79-117, Oct. 29 and 88-106, Nov. 5), but the Lakers recently suffered two consecutive losses to teams currently sitting in second in the west (the Spurs) and first in the east (the Magic).

The Lakers traveled to San Antonio Jan. 14 for one of the most exciting games of the season thus far against the 27-13 Spurs. This was the teams’ first match-up since last season’s Western Conference finals.

With only 10 seconds left in the fourth, Spurs guard Roger Mason hit a jumper then earned an extra point after a foul by Derek Fisher. The Laker point guard was 4-4 from downtown (for 16 points in the game), but the team’s offense was not able to retaliate after Mason’s three-point play and suffered a 111-112 loss.

The Lakers headed back to Staples for a Jan. 16 meeting with Orlando, the team with the best record in the league (33-8). Even though Bryant ended up with a triple-double (28 points, 11 assists, 13 rebounds), the Lakers were no match for the magic of explosive center Dwight Howard (25 points and 20 boards, his 20th double-double this season) and guard Jameer Nelson who scored 15 points in the fourth. Orlando beat the Lakers 109-103 for their sixth consecutive win.

But the week’s most anticipated game happened Monday night as the 31-8 Cleveland Cavaliers journeyed to Staples. The Cavs, led by one of the best players in the league, forward LeBron James (27.6 points, 7.2 rebounds, 6.6 assists, 2 steals and 1.3 blocks per game), sat at No. 1 in the east coming into the game but weren’t able to stop the aggressive teamwork of the No. 1 in the west Lakers.

Bryant dislocated the ring finger on his right (shooting) hand in the first few minutes of the game, but surged onto garner 20 points, 12 assists and six rebounds. Pau Gasol led the Lakers with 22 points and 12 rebounds, while Andrew Bynum and Sasha Vujacic both scored 14 points and Fisher contributed 11. Trevor Ariza made two 3-pointers in the final two minutes of the fourth that ignited the Lakers’ 14-4 scoring run and led up to their 105-88 victory.

The Lakers will spend the rest of the week at home, against the Wizards Jan. 22, the Spurs Jan. 25 and the Bobcats Jan. 27. The Clippers will host Oklahoma City Jan. 23 at home, then travel to play Golden State Jan. 25 and return home to play Portland Jan. 26.

PLAYER OF THE WEEK: PAU GASOL

Many anticipated a mega Bryant/James battle Jan. 19, but it was Gasol who stepped up with a Pau-erful performance: pulling down boards on both ends of the court and shooting 11-of-13 in his 36 minutes of play.