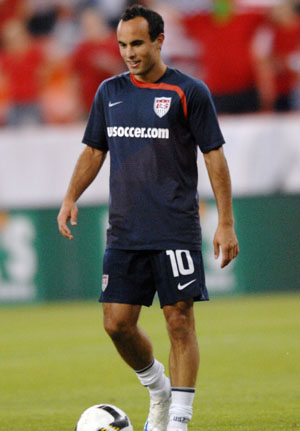 FIFA’s next World Cup is nearly 500 days away. The Confederations Cup is in June. Yet, soccer never seems to rest.

The U.S. men’s national soccer squad continues its road to qualify for South Africa 2010 as it plays host to Sweden in an international friendly Saturday at the Home Depot Center in Carson at 5:30 p.m. It is the team’s first match of 2009.

Sweden lost to the U.S. in 2008 by a score of 2-0 at the Home Depot Center. Striker Landon Donovan was one of two players who scored in the victory.

Saturday’s contest will serve as preparation for the team’s upcoming qualifying matches to the 2010 World Cup in South Africa. Team U.S.A. opens the final round of qualifying as they host heated rival Mexico Feb. 11 in Columbus, Ohio. The U.S. is also scheduled to host and travel to El Salvador, Trinidad & Tobago, Costa Rica and Honduras for one affair.

During June, the U.S. team will head overseas to South Africa to compete in the Confederations Cup, which is held every four years. They are scheduled to face Italy, Brazil and Egypt in the group stage.

Southern California native Donovan leads a player pool totaling 52 individuals as of Jan. 5. Donovan, who is currently playing with FC Bayern Munich in Germany’s Bundesliga on loan from the Los Angeles Galaxy, played the entire 90 minutes in his debut Jan. 10. Bayern Munich outlasted Al Jazeera Sports Club in a friendly 3-2 in Abu Dhabi.

He went onto net his first goal in the 91st minute in the following affair when Bayern defeated Al-Wehda in Jeddah, Saudi Arabia Jan. 12.

Tickets for the game, which will be televised live on Galavision and Fox Soccer Channel, range from $18-$150 and can be purchased through Ticketmaster. Parking is $15.