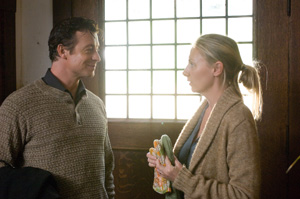 Simon Baker and Hope Davis in The Lodger
(Credit: Courtesy of Stage 6 Films)

As if Hollywood hasn’t ripped off Jack enough. Now, the 19th century unsolved case of London’s psychotic serial killer has been unceremoniously reopened and repurposed into another run-of-the-mill thriller(ish) film.

Joe (Donal Logue) and Ellen Bunting (Hope Davis), in desperate need of cash fast, rent their guesthouse to a lodger (Simon Baker), a writer who prefers to remain in solitary confinement. Despite his wish for seclusion, the lodger has a way of creeping into the main house in the dead of night … for scissors. Though, oddly enough, the Bunting wife is intrigued and attracted to the mysterious stranger.

But when prostitutes are brutally murdered along West Hollywood’s Sunset Strip, everyone is a suspect. It is grisly, life-hardened detective Chandler Manning (Alfred Molina) who becomes entrenched in the mystery that is a precise replication of the murders from over 100 years ago.

With partner Street Wilkenson (Shane West), Manning must follow clues and suspects to find the Jack the Ripper enthusiast before the final victim has her internal reproductive organs removed as well.

Based on the bestselling 1913 novel by Marie Belloc Lowndes, The Lodger was originally developed as a silent black and white film in 1927 by legendary director Alfred Hitchcock. This latest adaptation was written for the screen and directed by newcomer David Ondaatje as a personal tribute to Hitchcock whose cinematic cannon Ondaatje has studied extensively.

However, the modern revamping of the novel feels more like a made-for-TV program than a theatrical film. Its biggest obstacle is the script, which is unfocused and, at times, lost in too many subplots.

The actors do with the material what they can, but the dialogue does not provide much support, hindering performances. Character development feels pregnant and forced, especially Manning’s relationship with his daughter (Rachael Leigh Cook) and suicidal wife (Mel Harris).

The film has its moments of gasps and giggles, but as writer and director, Ondaatje is unable to reconcile screen time between the important and the trivial, the unique and the clichéd, the vibrant and the vacant.